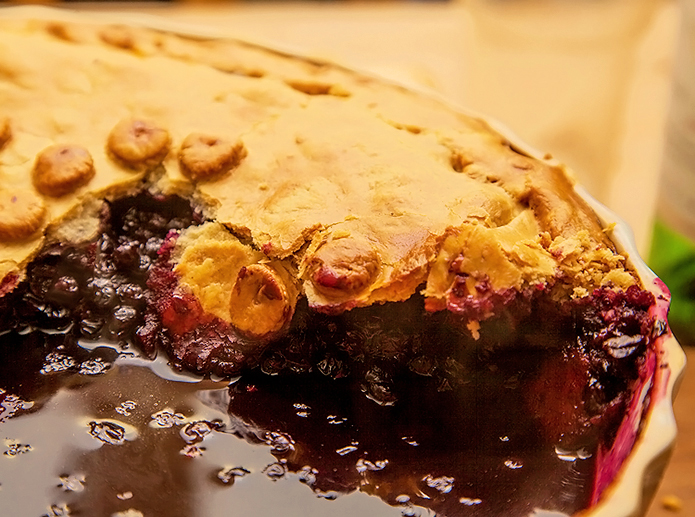 Has there ever been a fruit with as many different names: wimberry, whinberry, winberry, windberry, bilberry, fraughan, hurtleberry, whortleberry, blaeberry, black-heart and myrtle berry (after the wimberry’s Latin name Vaccinium myrtillus)? They are all names from different parts of the British Isles to describe this tiny purple moorland berry – generally speaking the Welsh call them wimberries, the Irish call them fraughans, the English say bilberries and the Scottish use the word blaeberry, although there are many derivations of the word and regional differences.   In the USA, they are known as huckleberries, a derivation of the word hurtleberry, named by English settlers in the 17th Century.

One name used in recent years to describe it is the blueberry, but alas this is incorrect; although it is part of the same Vaccinium genus, and shares a similar colour on the outside, the wimberry is slightly smaller, has a fuller taste than the blueberry with a special edge of bitterness, and has a different internal colour – blueberry fruit pulp is a light green colour, whereas the wimberry is red and purple; hence why the blueberry doesn’t stain and the wimberry does! 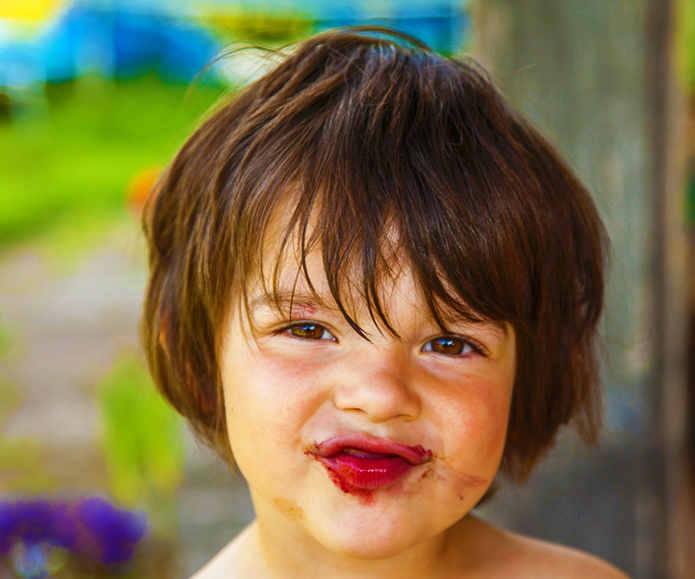 The introduction of blueberries to the British public in the past decade or two via the supermarkets has created the automatic assumption that they are one and the same, but they are different – the wimberry is a native plant to our Isles, but the blueberry isn’t. It does get a bit confusing because the Swedes called wimberries ‘blueberries’ based on the direct translation of the word for them ‘Blåbär’ (which is presumably where the Scots get their word Blaeberry from, although I’m told that the Scots Gaelic word for blue is ‘blae’ – all very confusing!), but they are not actually blueberries.  Anyway, enough of the semantics…

My memories of the wimberry stretch back to early childhood; we developed a family tradition of picking wimberries when on family holidays to visit relatives in Wales in late summer. It always involved a decent hike up a mountain in the Brecon Beacons, as the wild berries are only found on hillsides and mountain slopes, amongst heathers and ferns, on acidic, peaty moorland soil, and then a carry home on the shoulders of older cousins or adults in the party.  The very fact that wimberries are grown in isolated moorlands is a blessing for many reasons; the fact they’re isolated means they’re less likely to be picked by others, but it’s also a reason to go walking in some of the most beautiful parts of the British Isles. 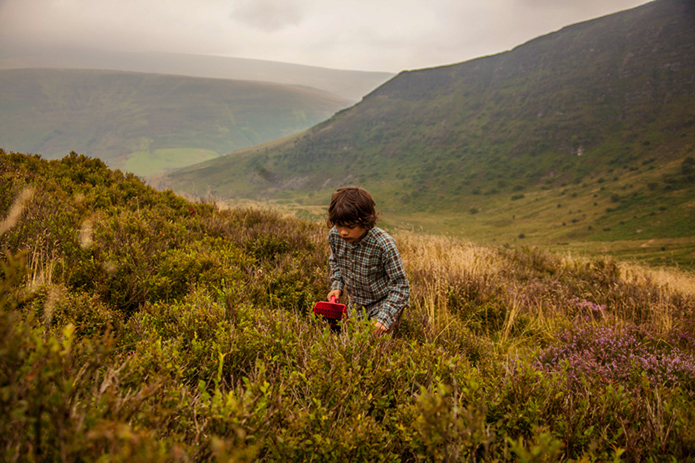 There’s an element of ritual to wimberry picking. In Ireland, fraughans (the Irish word for wimberries) were celebrated with Fraughan Sunday, the last Sunday in July, being a survival of the pre-Christian Celtic festival of Lughanasa (or Lughnasadh), where young people would climb the hills to pick the berries and the girls would incorporate the berries into a cake to take to the local dance that evening and present the cake to whatever ‘fella’ they had their eye on. In our family, the ritual associated with wimberry picking involved making a pie that same evening after picking, as just reward for all the back-breaking work picking them, and catching up with extended family and sharing stories.  For me, there’s no better summer dessert that a locally sourced wimberry pie made with fresh wild berries. 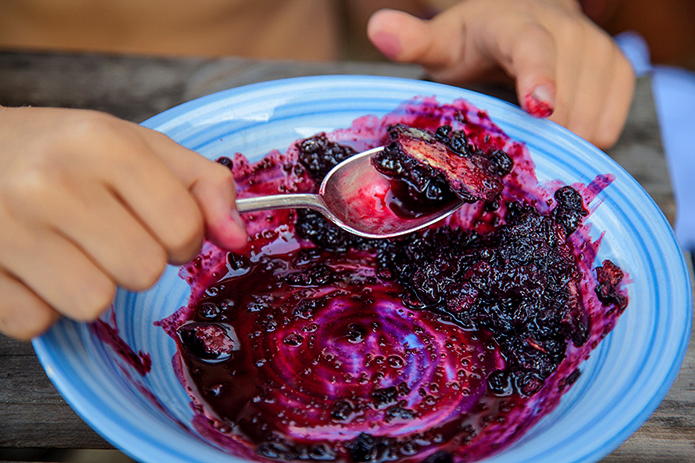 Now that we live in Wales all year round, we have the opportunity to recreate these childhood memories on a regular basis, and my children, and our friends’ children, delight in wimberry picking expeditions. 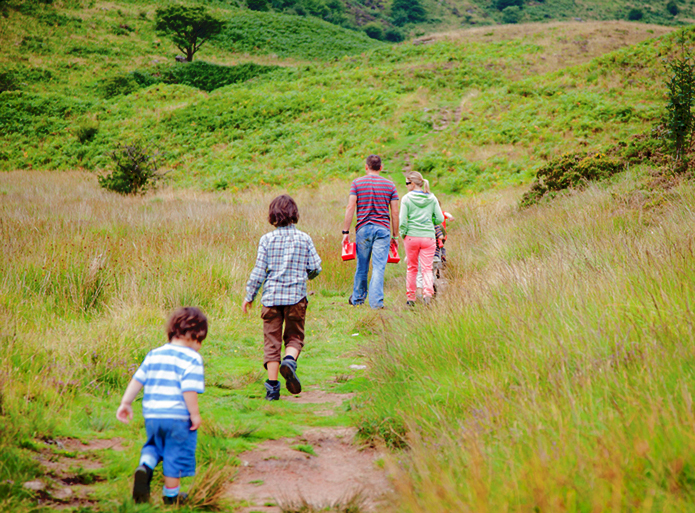 The wimberry is a distinctive fruit; its mauve/violet-coloured berries are found growing as low growing plants, no more than about 45cm tall (although some will grow taller if left ungrazed by sheep), and they’re not always easy to spot, as the berries can be hidden in the leaves. 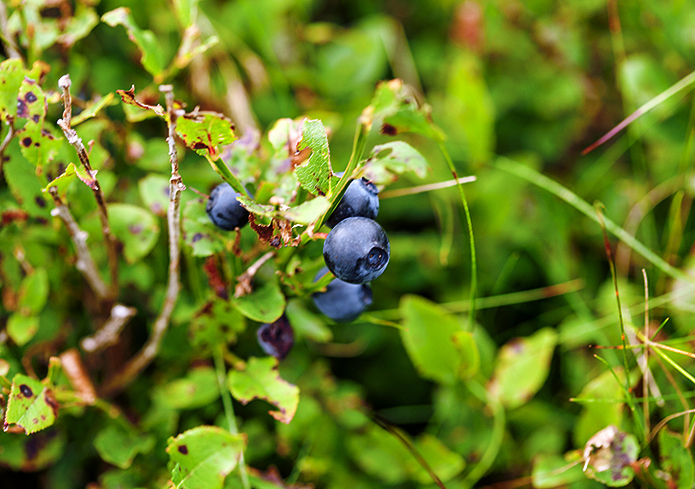 The berries, harvested in mid/late summer, aren’t dense croppers, and hence the fruit isn’t cultivated commercially, but fortunately the plant has a creeping rhizome that allows spreading, and it’s not uncommon to stumble across patches of wimberries the size of an acre or so.  Many people prefer to use harvesting combs / berry scoops (known as ‘scrabblers’) to maximise results. 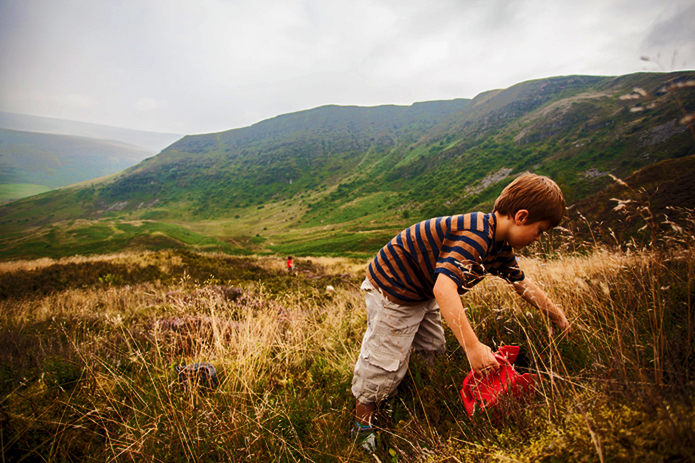 The combs are beneficial, but it does result in a lot of unwanted twigs and leaves which needs separating out later. 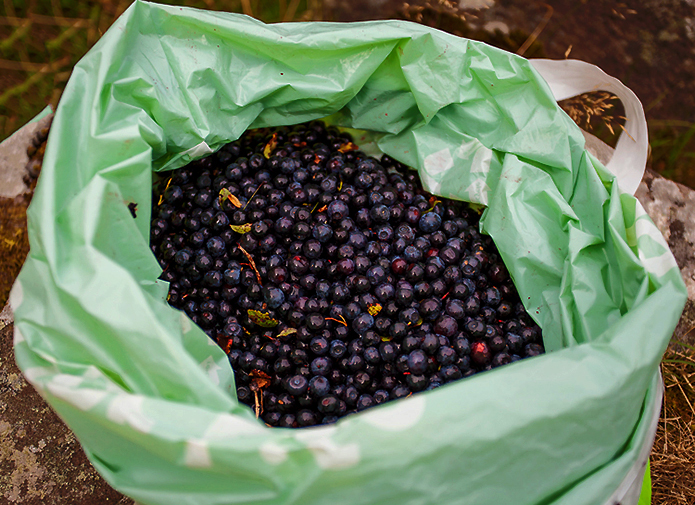 It can be incredibly frustrating though to have walked several miles to your favourite picking spot only to find a team of professional pickers has been there before you, no doubt supplying the demand for wimberries for medicinal purposes and health food shops (usually sold under the northern English term for them: bilberries), as they contain a high content of anthocyanins, providing potent antioxidant activity.  Wimberries were taken as a remedy for diarrhoea on the Hebrides, and believed to be good for general health and eyesight, and even rumoured to be beneficial to diabetes sufferers. In fact, it isn’t just populations of the British Isles that appreciated the health and dietary benefits of wimberries; Native Americans, throughout America’s north west, including the Crow, Nez Perce and Yakama tribes, depended on plant foods such as berries and dried roots for winter survival, and gathered huckleberries especially to be dried and stored as a winter food when there was little or no fresh foods available. 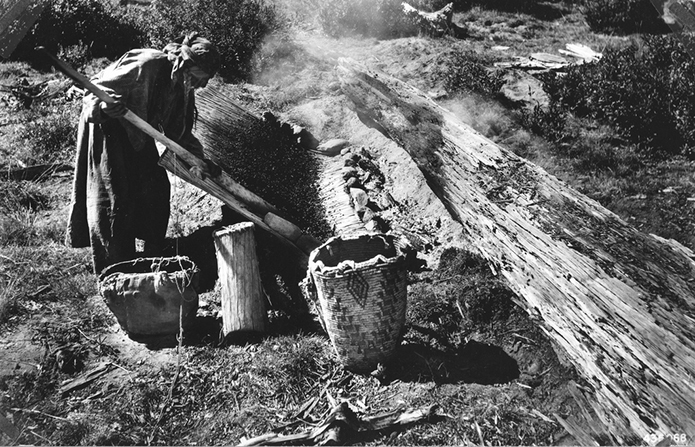 Wimberries were also used as a common form of natural dye in years gone by; as any wimberry picker knows today, it’s almost impossible to pick wimberries without staining your hands as they’re a relatively soft fruit, although the inky dye is easy to remove after a couple of washes. 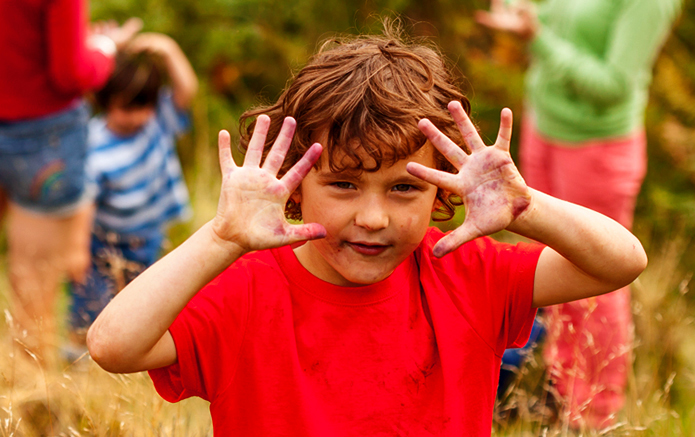 If you manage to find a decent patch of berries, and you’re able to bring the bounty down with you in plastic bags, rather than devoured on the spot by hungry pickers (that is half the fun, after all!)… 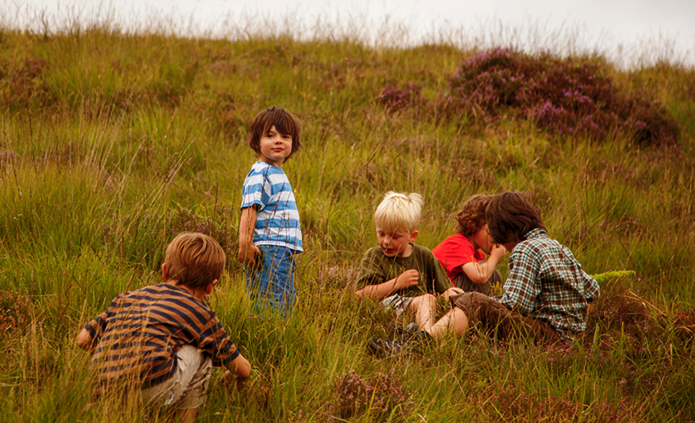 … then you need to decide what to make with them; it’s not just pies that wimberries can be used for – they’re used to make jams, tarts, syrups, syllabubs and muffins, and can be preserved by drying on their own or with sugar on a tray, either naturally in the sun or in a low oven.

For wimberry pie, I’d recommend a shortcrust pastry.  Roll out two thirds of the pastry and use for the base of the pie in a pie dish sized appropriately for your bounty.  De-stalk and wash the berries and place them in the pie dish. 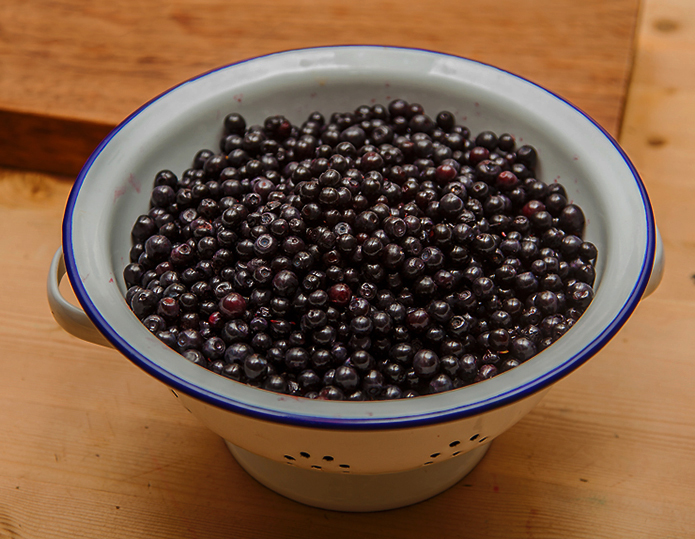 Scatter some sugar over the berries; without sugar the berries are quite bitter (not as much as blackcurrants, but still quite ‘tart’, so I’d recommend adding some).  I apply a liberal amount as I have quite a sweet tooth! Some people like to add some apple to the dish, and this does go really well with wimberries, so worth sampling! 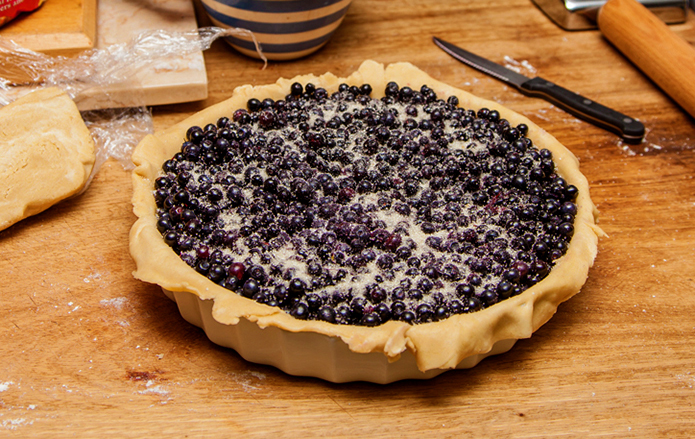 Place the remaining pastry over the top of the berries, and make two insertions in the middle to allow steam to escape.  If you like, you can design a picture out of leftover pastry for the top of the pie.  I like to brush a coating of milk (or egg white) over the pastry and sprinkle brown sugar for a nice finish. 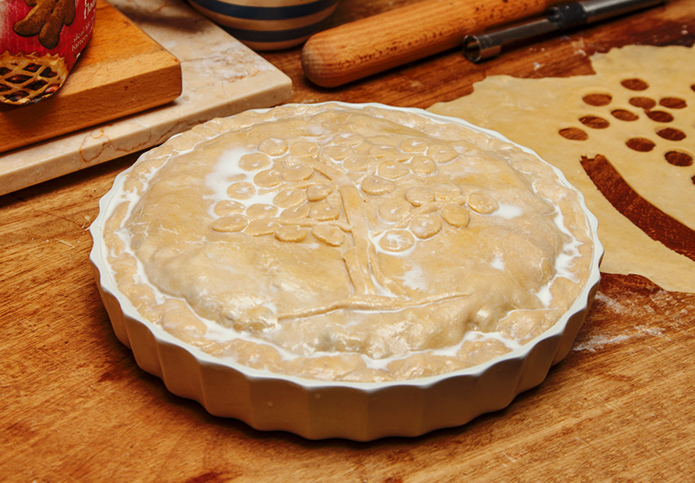 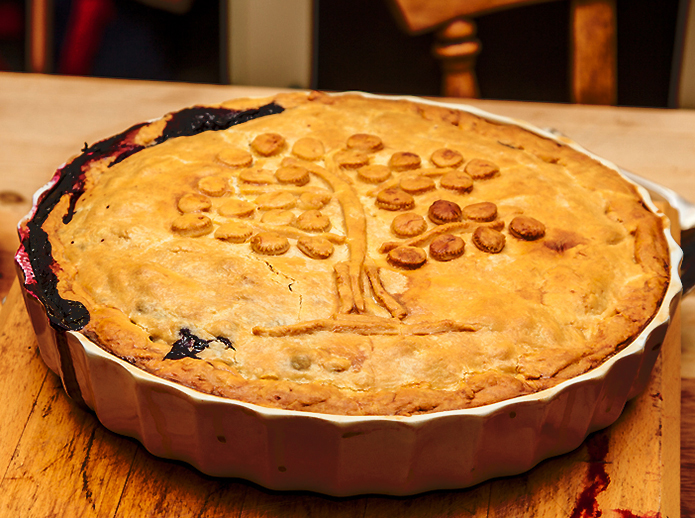 How you serve up the pie is a matter of choice. Some people serve it piping hot with lashings of cream, custard, Greek yoghurt or ice cream.  Others prefer to savour it cold.  Myself, I like it served both hot and cold without anything else, just bathed in its own juices – wimberry pie is a very juicy pie, and the pastry base does get quite soggy. I’ve heard it mentioned that some people sprinkle semolina on the pastry base before adding the berries as this soaks up some of the juice, but I’ve not tried it as yet. 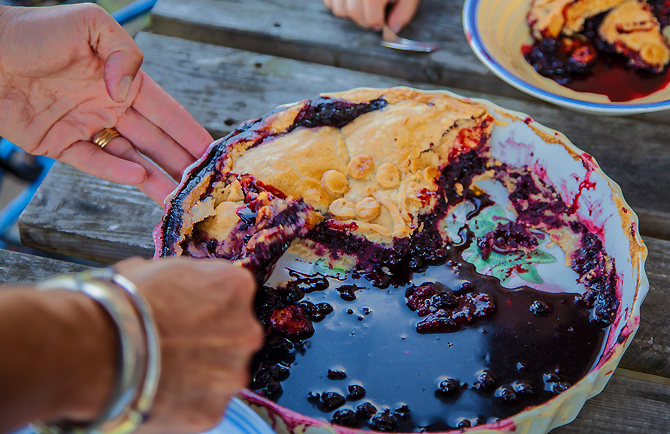 As wimberries are a northern European berry, grown in upland, moorland areas, then it might be a bit tricky to source fresh berries.   Options involve buying frozen wimberries (probably sold as ‘bilberries’), or buying from a local Polish store, as the Poles are extremely fond of these berries.  You could always substitute wimberries for blueberries, but they won’t quite have the same intense taste, and you certainly won’t get that mucky mouth! 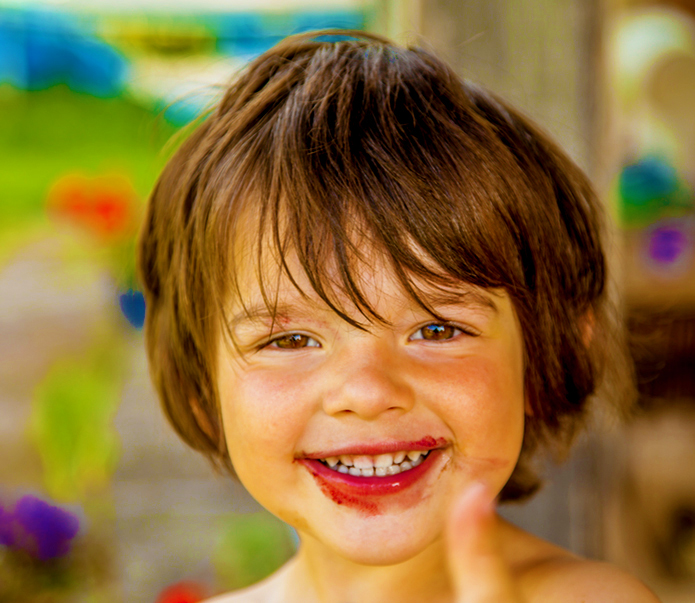