An overview of the work of Finnish architect and designer, Alvar Aalto. 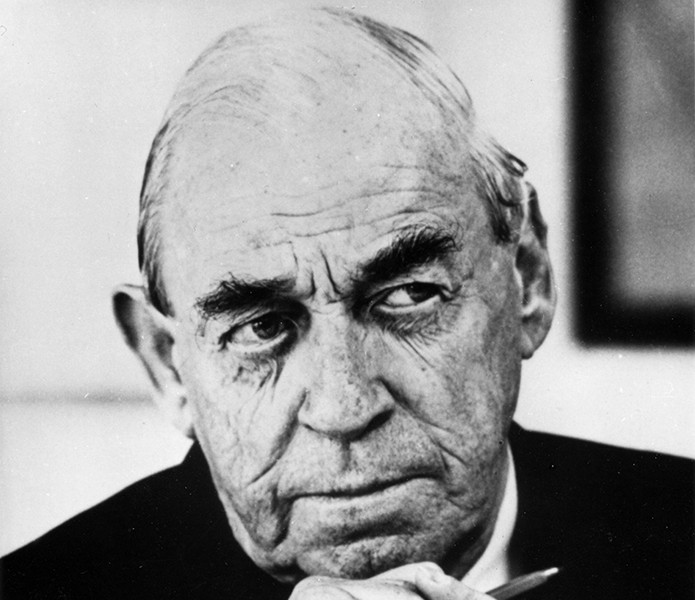 Portrait of Alvar Aalto in 1970. Photo by Ensio Ilmonen / Lehtikuva via Artek.

In today’s design-saturated world, Finnish architect and designer Alvar Aalto’s modernist legacy endures as a testament to his great genius. Born ‘Hugo Alvar Henrik Aalto’ in 1898 in Kuortane, a small municipality in western Finland (around 345 km north of Helsinki), Aalto remains one of Finland’s best-loved and most celebrated sons.

An avid drawer, the young Alvar chose to study architecture at the Helsinki University of Technology (now part of the Aalto University), graduating with distinction in 1921. Initially practicing architecture in Helsinki, Aalto found his early commissions took him away from the city. As a result, in 1923 he established his first studio in Jyväskylä—a small city in central Finland, Aalto had originally moved there at the age of five with his parents and siblings. He employed the talented Aino Marsio, a qualified architect, as his assistant; the pair later married in the autumn of 1924. In 1927, after winning a competition for the Southwestern Finland Agricultural Cooperative Building, Alvar, Aino and their family relocated to Turku, an industrial port in south-west Finland. Here, Aalto would design a number of buildings, inspired by new movements in functionalism and modernism. 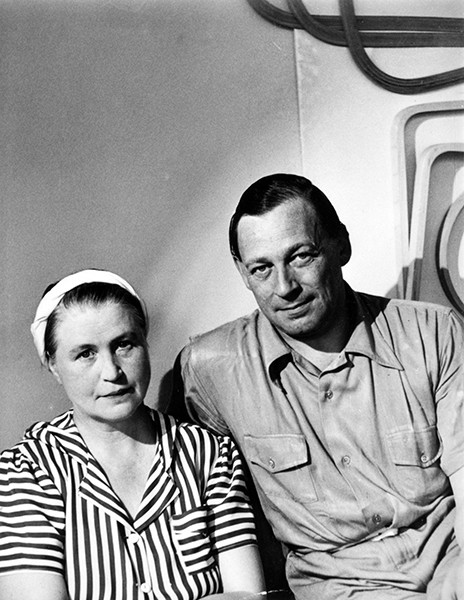 Aino and Alvar Aalto (circa 1940s). Photo by Herbert Matter via Artek. 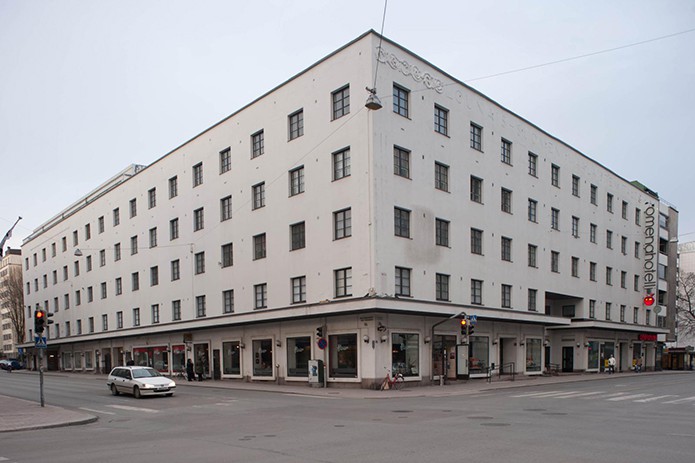 Aalto was a leading character in shaping international modernism, an ‘international style’ of architecture that emerged in the 1920s and 1930s. His 1929 Turun Sanomat newspaper office building, located in Turku, was part of a 1932 exhibition of modernist architecture at the Museum of Modern Art (MoMA) in New York City. Curated by architect Philip Johnson and architectural historian Henry-Russell Hitchcock, the exhibition sought to advance and enhance the premise of international modernism: one in which a building’s function was critically assessed, with a ‘strictly rational use of materials, an openness to structural innovation and the elimination of ornament.’1 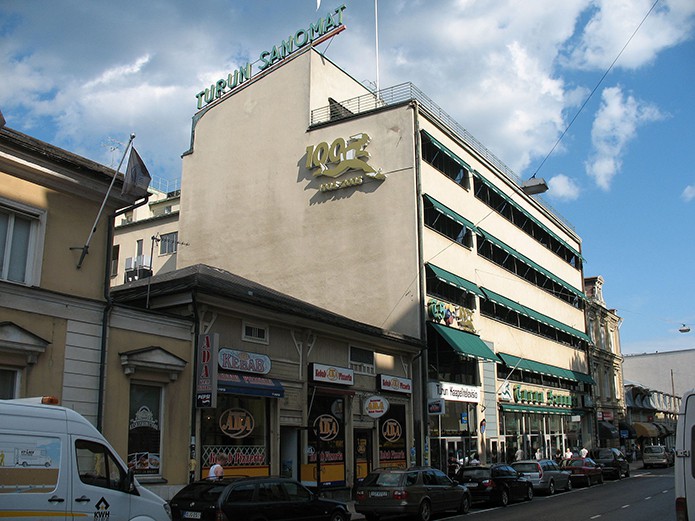 In 1929, Aalto won an open competition to design the 184-bed Paimio Sanatorium: an isolation hospital for patients with tuberculosis, it was located around 30 km east of Turku. Built between 1930 and 1933, Aalto’s functional yet humane design, capitalised on the surrounding nature and focused attention on the needs of patients. He gave thought to the peacefulness of the environment, sunlight, fresh air, comfort, lighting and furniture. The Paimio Sanatorium was renamed the Paimio Hospital in 1971, and stands as a testament to Aalto’s vision. In continuous use as a medical facility, the building attracts visitors and Aalto enthusiasts from across the globe.2 At the time, it helped to firmly establish Aalto’s reputation as an architect, both at home and internationally. 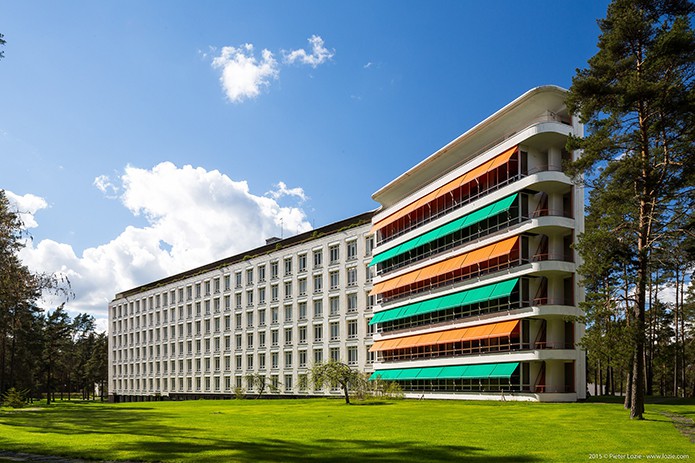 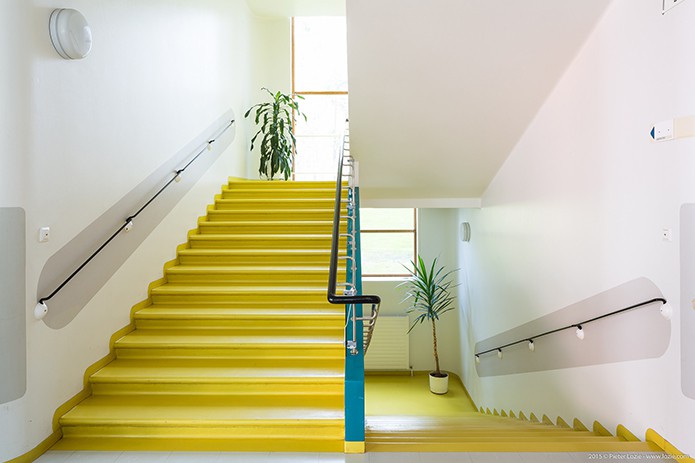 A stairwell in the Paimio Sanatorium with a calming yellow colour. Photo © Pieter Lozie. 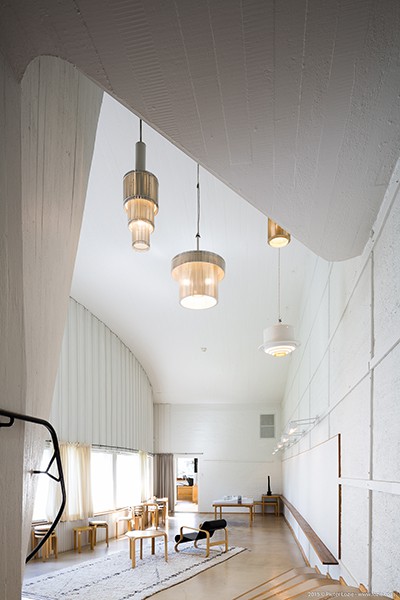 With the success of the Paimio Sanatorium’s design, Aalto’s subsequent architectural commissions would combine a more organic modernist style and vocabulary with a structure’s natural surroundings: something of an Alvar Aalto trademark. Villa Mariea, a modern residence designed by Aalto for art aficionados’ Maire and Harry Gullichsen (and built in 1939), was a representative example of this. The home achieved world-wide attention and acclaim, combining Alvar Aalto’s organic forms with Aino Aalto’s modern interior. (Source) 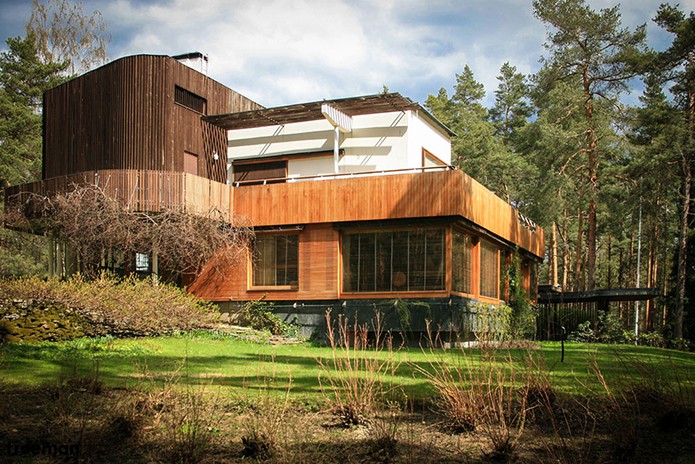 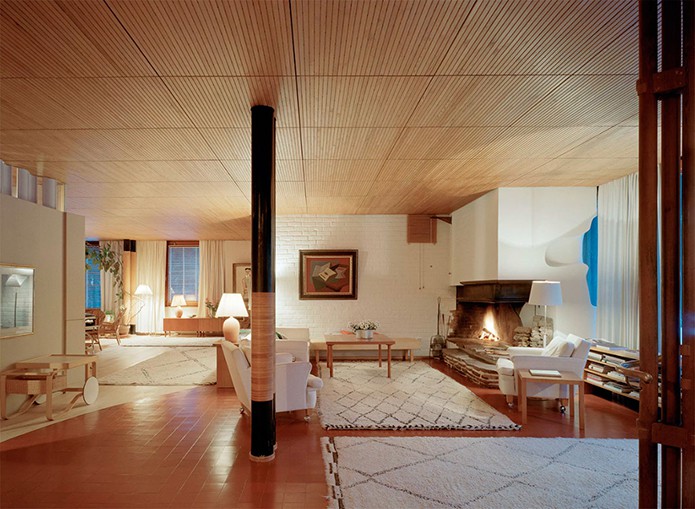 The furniture that Alvar Aalto had been developing with Aino and woodworker Otto Korhonen, was finding buyers. Experimenting with bending wood, in a style recognised as ‘human modernism’, Aalto’s furniture in many ways reflected the Finnish character: exuding warmth, strength and a natural resolve. Aalto considered furniture and lighting as part of a holistic enterprise, one that incorporated architecture and design. The Paimio Sanatorium was a prime example of this, with furnishings designed specifically for the building and its patients.

In 1935, Artek was founded by Alvar and Aino Aalto, Maire Gullichsen (a Finnish art collector and curator and later resident of Villa Mariea) and Nils-Gustav Hahl (an art historian). The company’s strategy was ‘to sell furniture and to promote a modern culture of living by exhibitions and other educational means’.3 Artek’s overarching principle was to encourage an aesthetic lifestyle within the home, with designs that were both beautiful and functional; it’s a principle the company maintains today. The founders were inspired by functionalism and a vision to ‘interconnect modern visual arts, rational furniture production and popular education.’4

Alvar Aalto’s distinctive style meshed modernism with a particular organic fluidity. His experimental approach to bending wood and a creative understanding of the flexibility and malleability of glass, would ensure his designs were both innovative and individual. As previously noted, Aalto’s style can be summarised as one that embraced human modernism, benefiting people and their everyday needs: physiologically, psychologically and emotionally.

Renowned designs by Alvar Aalto for Artek include:

Stool 60 was also known as the L-leg stool. The L-leg is a solid wood leg with a laminated bend at 90°. Patented in 1933, it would become a standard feature of Aalto’s furniture designs. The stool was originally designed for the Viipuri Library in Finland (Viipuri was once a Finnish port city that Finland ceded to the Soviet Union in 1939-40). Stool 60 was first presented to the public during an exhibition in London’s Fortnum & Mason department store, where it garnered much praise.5 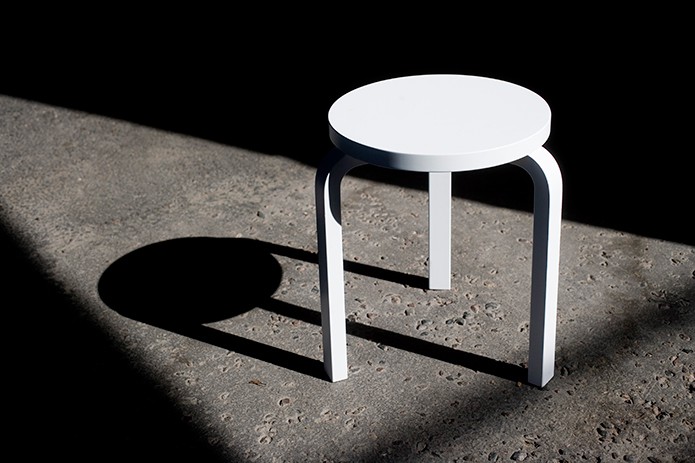 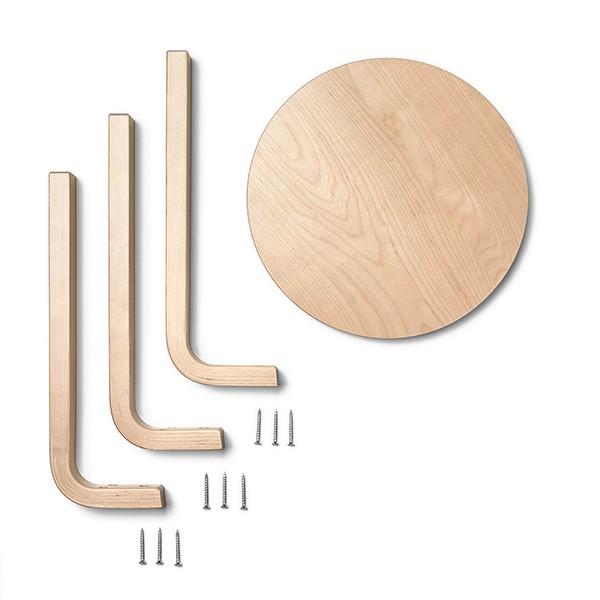 Designed in 1952, the A110 was also known as the ‘Hand Grenade’ lamp. It was created for the home of the Finnish Engineers Association (a building designed by Aalto). 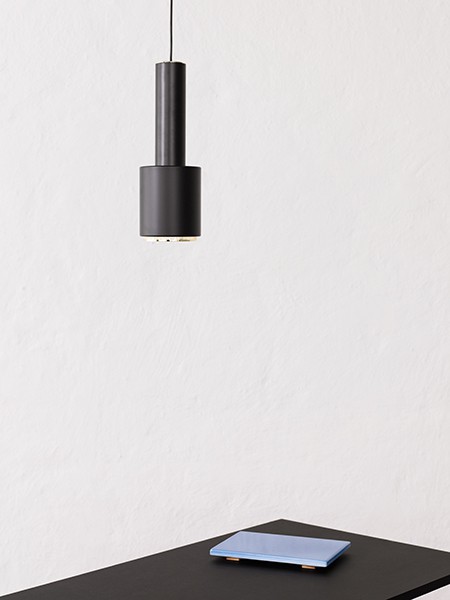 Pendant Light A110. Photo by Osma Harvilahti via Artek.

When designing the Paimio Sanatorium, Aalto approached the project from the patient’s perspective, ensuring the environment was one that adequately promoted well-being. Designed in 1932, his Paimio Lounge Chair (Armchair 41) was developed with the purpose of easing the breathing of tuberculosis patients, resulting in a beautifully organic and fluid shape. 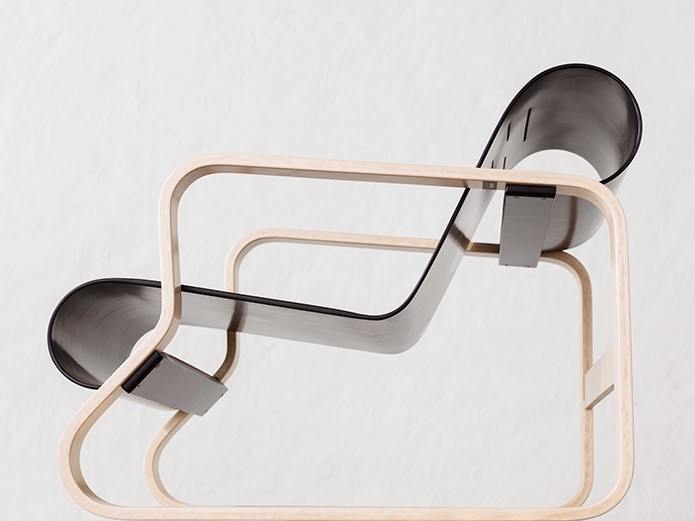 Designed by Aalto in 1932 for the Paimio Sanatorium, the stackable Armchair 403, also known as the ‘Hallway’ chair, has a birch frame and a seat made from moulded birch plywood. 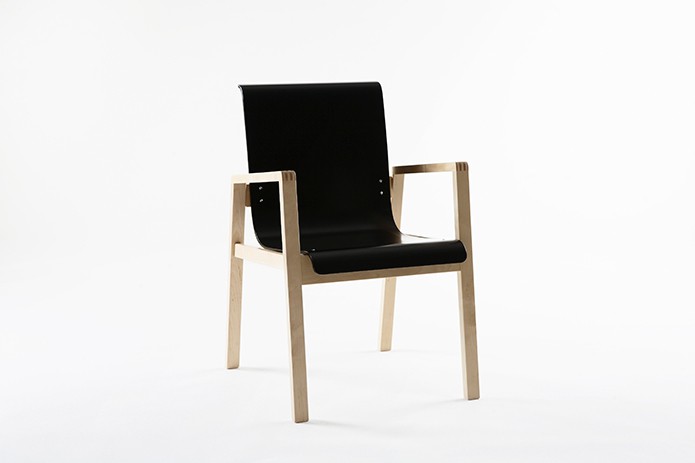 Designed by Aalto in 1936 for the Milan Triennale, the Armchair 400 is a sculptural opus. It is affectionately named the ‘Tank Armchair’, owing to the tank track-like profile of its arms. The 400’s bent plywood and cantilevered framework flexes to provide the sitter with an optimum level of comfort. Its zebra print upholstery was originally specified by Aalto. 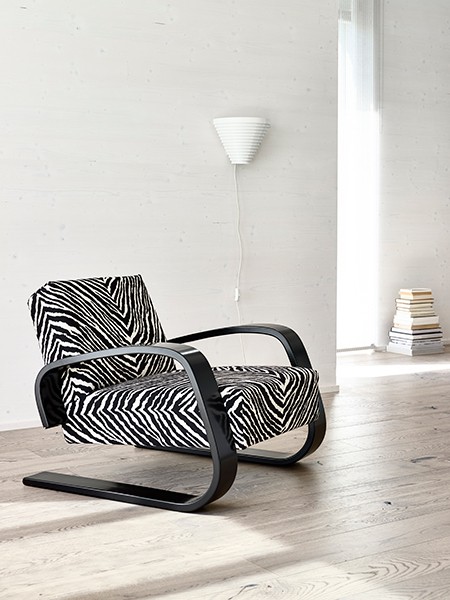 Armchair 400 with zebra print. Photo by Sameli Rantanen via Artek.

Designed by Aalto in 1939, the Armchair 406 is sometimes referred to as the ‘Pension Chair’, owing to the fact the user can sit in a ‘state of retirement’.6 Its cantilevered form is crafted from birch with a linen webbed seat. 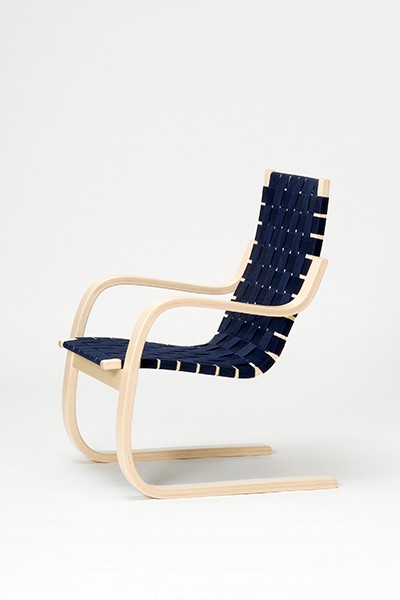 First shown at the Exposition Internationale et Universelle de Paris in 1937, Alvar Aalto’s glass vase is, indubitably, a design masterpiece. The Aalto Vase was designed in 1936 for a competition at the Iittala glassworks factory. A staple of modern Nordic design, it remains Iittala’s most iconic glassware series. Interestingly, Aalto did not receive a share in the vase’s profits, as the design was owned by the factory. 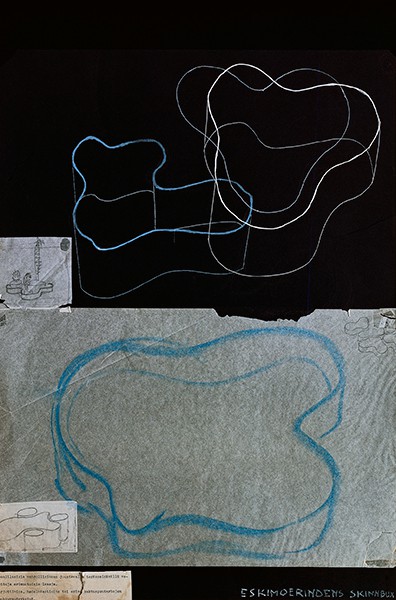 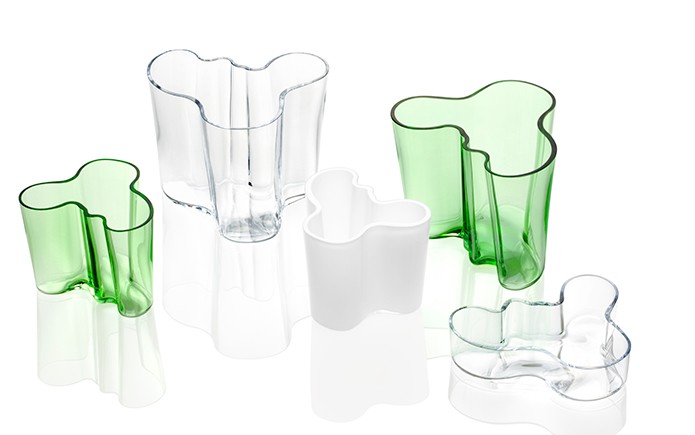 The origin of the Aalto Vase’s undulating and wavy shape remains the subject of much speculation: one theory suggests it is based on Aalto’s sketches titled ‘The Eskimo Woman’s Leather Breeches’; another submits that the shape might be inspired by the lines of the Finnish landscape.7 Whatever its origins, the prepossessing vase is available in a wide range of colours and sizes, each one mouth-blown at Iittala’s glass factory. It is undoubtedly one of Alvar Aalto’s best-loved objects. 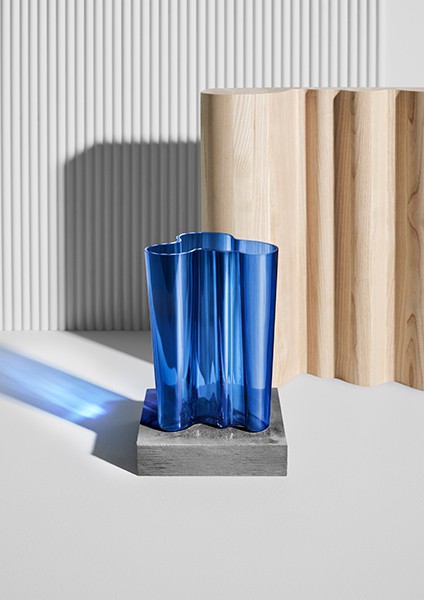 After Aino Aalto passed away in 1949, Alvar would seek comfort and solace in both travel and work. Arguably, it is Aalto’s pre-war efforts—and his collaborations with Aino—that are most extraordinary, maintaining great architectural and design significance. In 1952 he married his colleague, architect Elsa-Kaisa (Elissa) Mäkiniemi. With his star shining brightly, Aalto was one of a handful of people in Finland considered so important that, when running late for a Finnair flight, the airline would delay take-off until they boarded. By all accounts enjoying this attention, when Aalto did arrive at Helsinki Airport on time, he would instruct his driver to drive around ‘until he was late enough to stage a grand entrance.’8

Alvar Aalto passed away on 11 May 1976. A world-class and award-winning architect and designer, his human-centred design approach and 20th century legacy, remain ever-prominent.