An overview of the work of renowned British designer, Lee Broom. 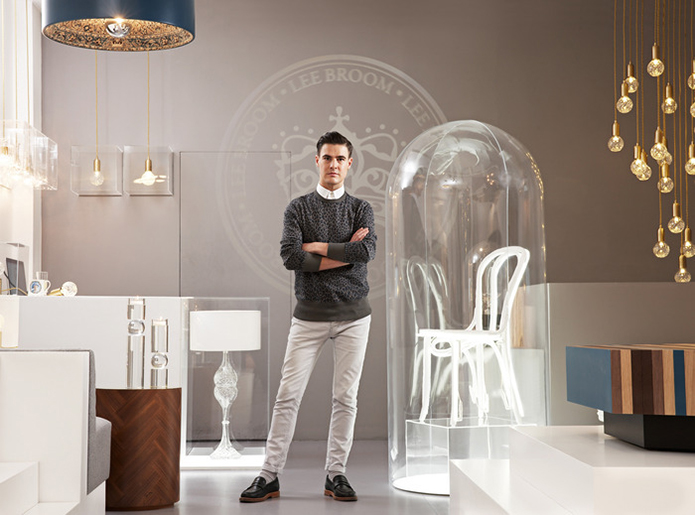 Lee Broom. Image by Jude Edington via ‘how to spend it’.

Lee Broom is a rather dapper chap, having a genteel countenance and an affable manner. The polished, passionate and highly acclaimed designer, whose status is one verging on celebrity, has a marked presence on both the British and international design scenes. His style mixes classic and contemporary genres, with lavish and opulent nuances. 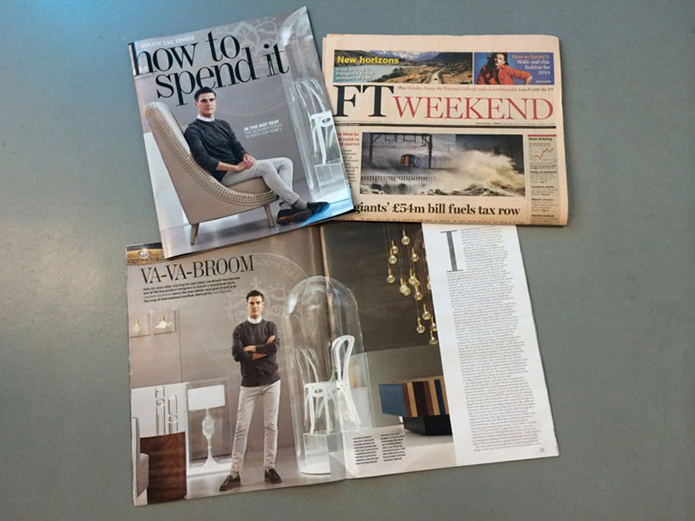 ‘how to spend it’ cover via Lee Broom email newsletter.

Broom was born in Birmingham in 1976. He attended theatre school and was a member of the Royal Shakespeare Company from the ages of 11 to 16. The drive and ambition to achieve success was impressed upon him from an early age. In an interview with the Financial Times ‘how to spend it’, Broom explains “the same ambition and drive are now channelled into a desire to make beautiful products that are different from those that other people make.” At 17 Broom entered a fashion competition that was judged by the celebrated fashion icon, Vivienne Westwood. He won the competition, impressing Westwood and as an unexpected consequence earned an internship at her studio. This experience persuaded Broom to enrol at London’s Central St Martins where he studied women’s fashion. 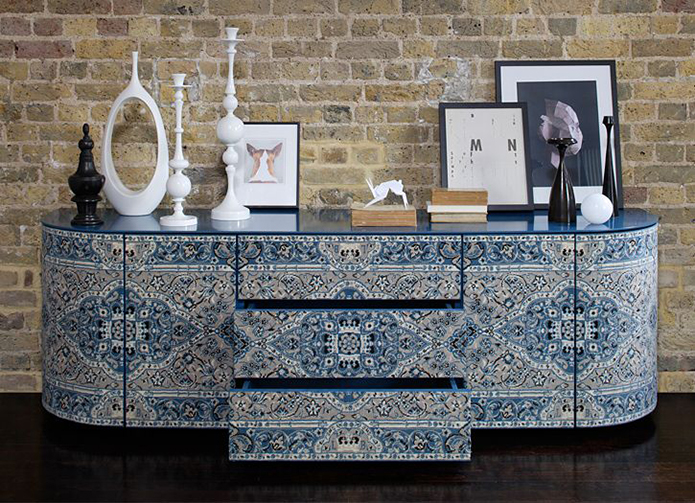 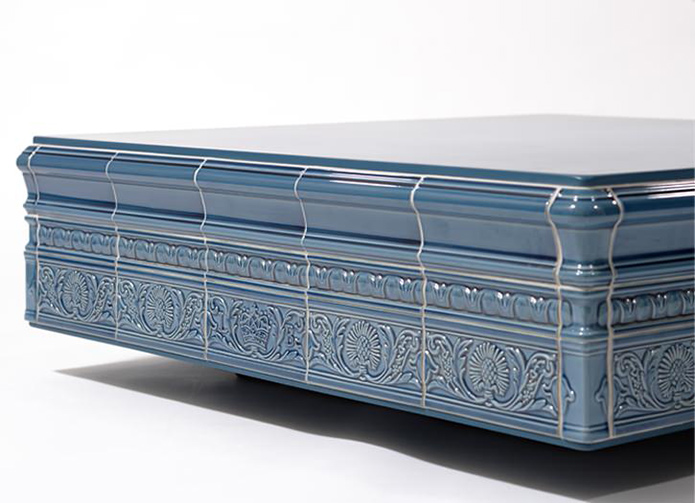 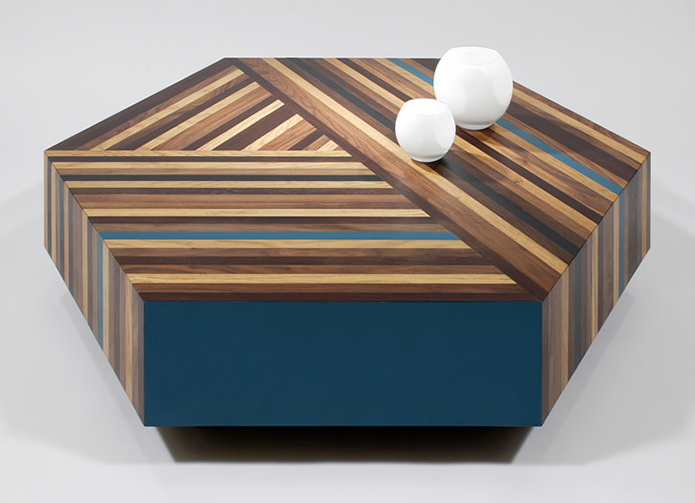 In working at Vivienne Westwood, Broom learned how to approach pattern cutting and fashion. In part, Westwood influenced his design philosophy. She had encouraged Broom to consider the past and its established techniques and then think about how they might be modernised. Examples of this include Broom’s ‘Heritage Boy’ collection and ‘One Light Only’. 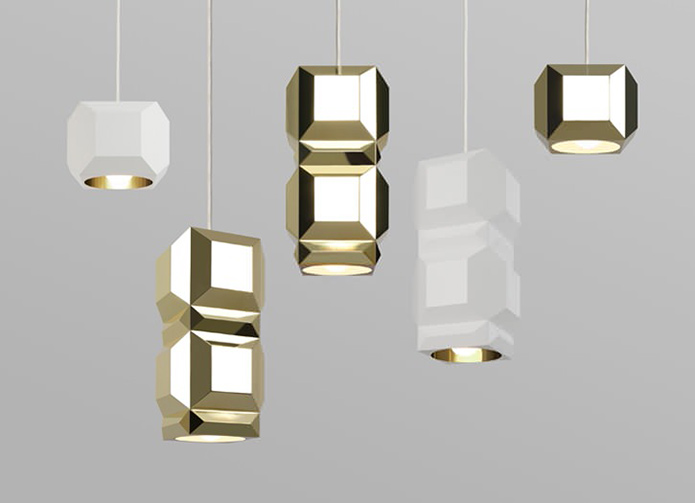 ‘One Light Only’ (2010) is a collection of pendant lighting that is inspired by Art Deco jewellery and fashion photography. Lights are presented in two striking finishes, matt white or polished gold. 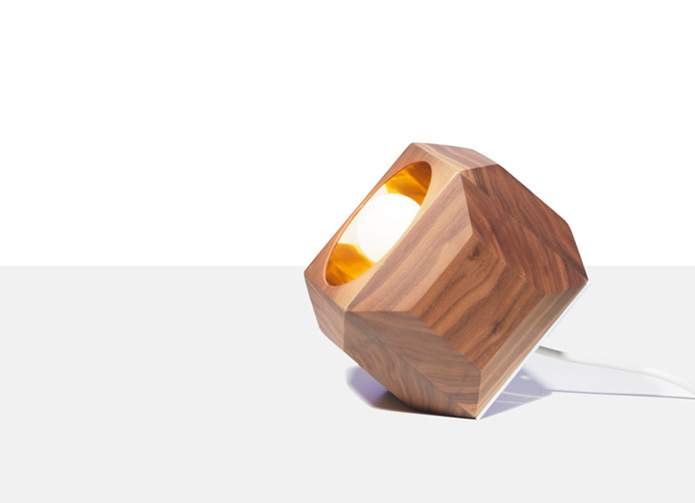 ‘One Light Only’ was reinterpreted in 2013 using warm, natural and tactile solid walnut.

Lee Broom’s own website proclaims him to be “one of the UK’s leading product and interior designers” (Source) and the Financial Times ‘how to spend it’ considers Broom’s “rock-glam brand [to be] on the cusp of international stardom.” (Source) Despite what will appear to many as a meteoric rise, Broom, a considered perfectionist, has been honing his craft and working hard behind the scenes for a number of years. Before product design, Lee Broom was developing a reputation as an interior designer. To support himself through college, he and a friend – Maki – provided interior styling on a small-scale for his local bar. Proving successful, this interiors service was sought by other venues. Eventually Lee and Maki established the partnership, Makilee, where Broom worked for five years before striking out on his own. 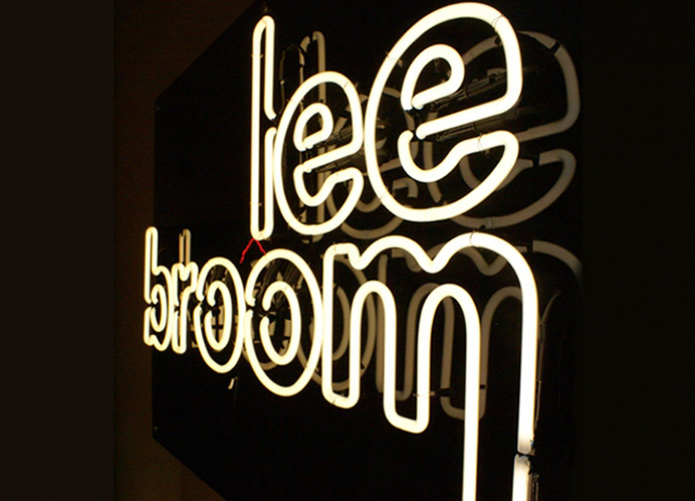 Broom launched his eponymous interiors label in 2007. That same year he debuted his first furniture collection, Neo Neon, at the London Design Festival. Since then, Broom’s product design and interiors portfolio has grown considerably, with five collections, over 40 retail, restaurant and bar interiors, and a number of collaborations. To date Broom has won 20+ awards including: the British Design Award 2012 for his Crystal Bulb and ‘Designer of the Year’ in the British Design Awards 2011. Broom believes that maintaining control over the creative process, from the initial concept to realising the final vision, is fundamental. He understands that many designers need to be entrepreneurs in order to fulfil their creative drive and importantly, to make money. 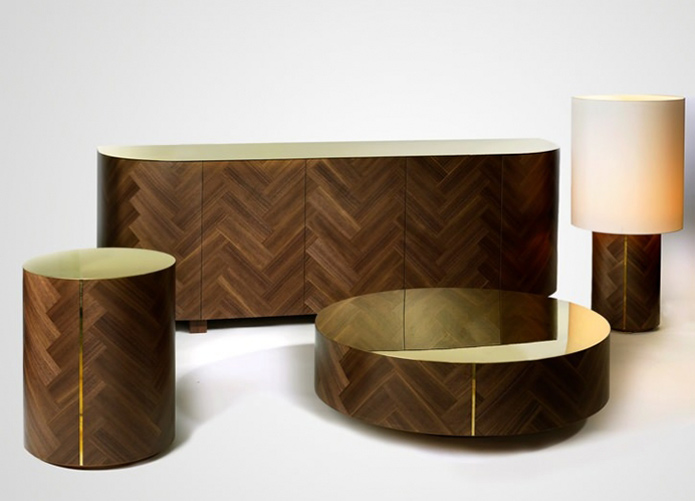 Broom is a fervent advocate for British design observing that: “We have a lot of talent, craftsmanship and industry at our disposal in this country and this is something which should be championed.” (Source) Britishness is at the core of the Lee Broom brand. When considering the manufacturing of a product, Broom says “I always start my search for a manufacturer in Britain and only go outside if I can’t find anyone here.” (Source). 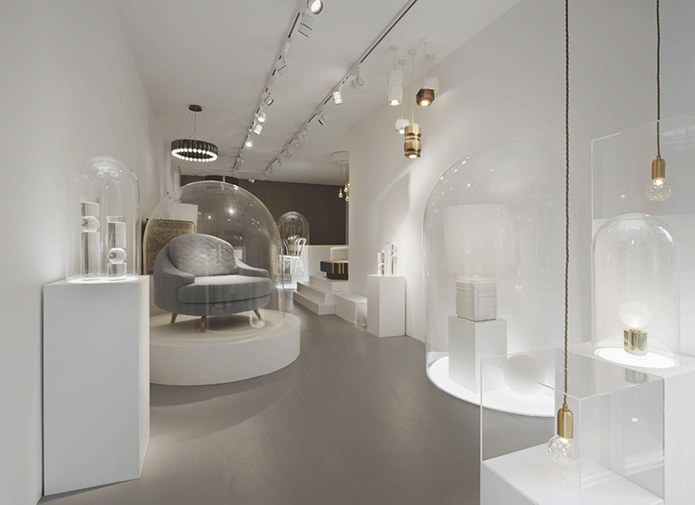 Lee Broom’s first store, Electra House, opened in London in September 2013 on Shoreditch’s hipster Rivington Street. Electra House is a strong brand statement, asserting Broom’s stature as a designer. It presents the complete Lee Broom collection in his most inimitable fashion and acts as a gallery, retail space, design studio and consultancy area. One notable detail about Electra House is that it once contained the electroplating equipment used to make some of Le Corbusier’s sofas. (Source) The showroom’s idiosyncratic design – it is trademark Broom – is both elegant and polished. Custom-made oversized bell jars are used to display some of the furniture, lighting and accessories. Whilst adding an element of drama to the space, they can also be interpreted as a way of saying ‘do not touch’. 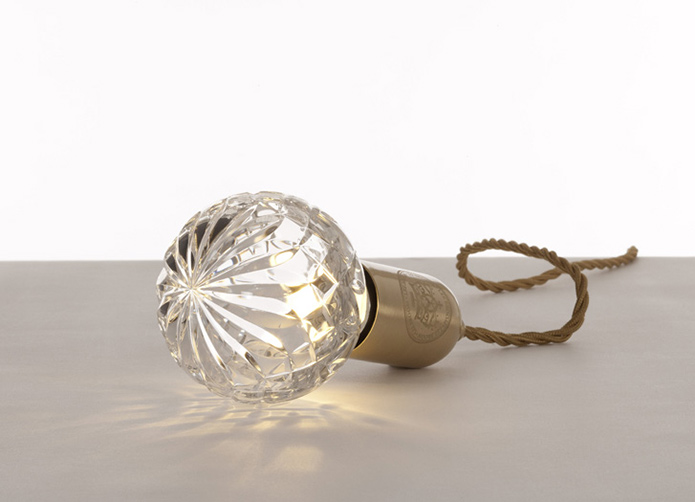 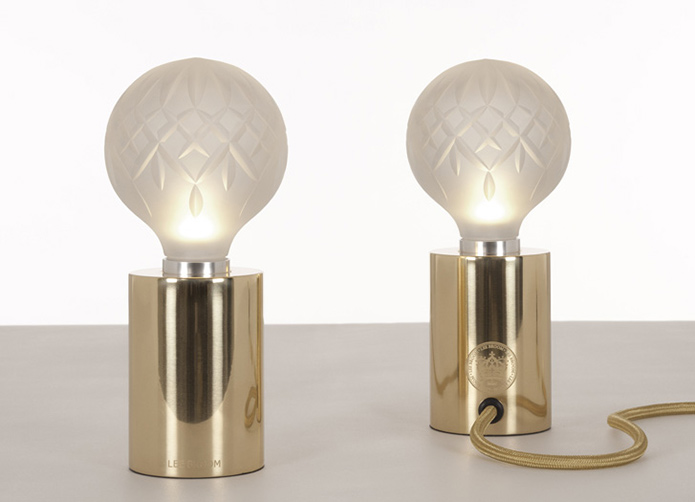 Whilst Broom’s early collections garnered praise and admiration from the wider design community, it was his 2012 Crystal Bulb that set him on course to becoming a household name. The Crystal Bulb is handblown lead crystal, cut with a classic crystal pattern and etched with the Lee Broom logo. Shaped as a conventional bulb it is both familiar and contemporary, having retro and industrial qualities. Its overall aesthetic is an ornamental one. Broom enjoys working with people who have been in their craft for many years, marrying traditional craftsmanship with a contemporary aesthetic. The Crystal Bulb is made by Cumbria Crystal, a small artisan British manufacturer and the only remaining producer of handmade English full lead crystal in the UK. Both small and affordable (retail is around £109), it is Broom’s equivalent to a luxury fashion house’s Eau de Toilette. There are other variations on a theme, including the Frosted Crystal Bulb Table Lamp, launched at Milan Design Week in 2013. Yet despite the bulb’s success, Broom is reluctant for it to become a defining project: “When people hear my name, I don’t want them just to think of the Crystal Bulb. In fact, I don’t want them to think of any particular piece – I want them to think of a whole experience.” (Source) 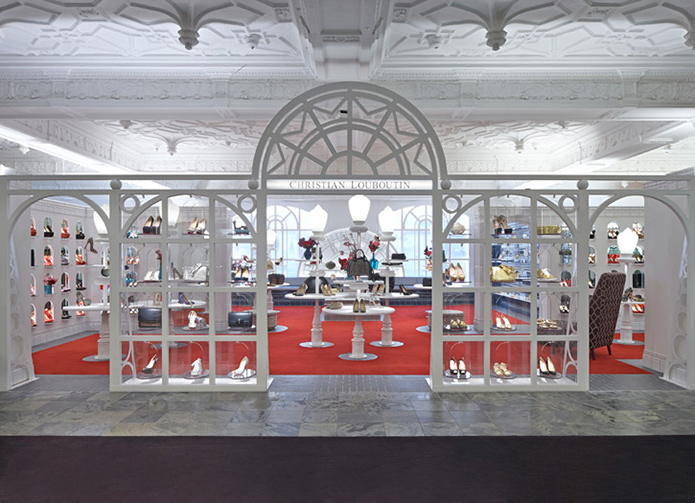 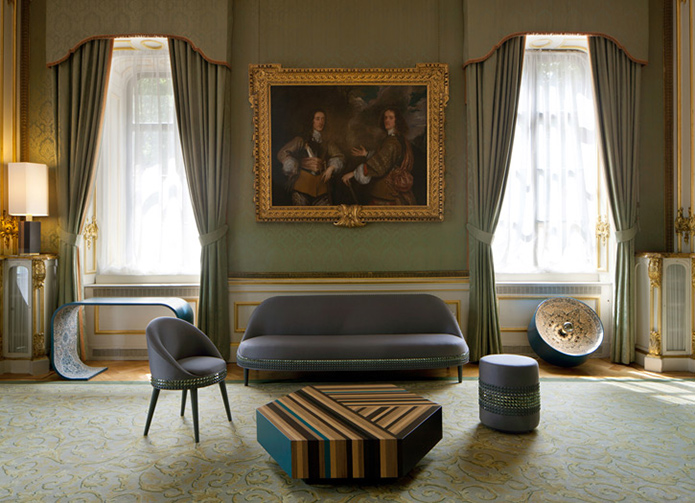 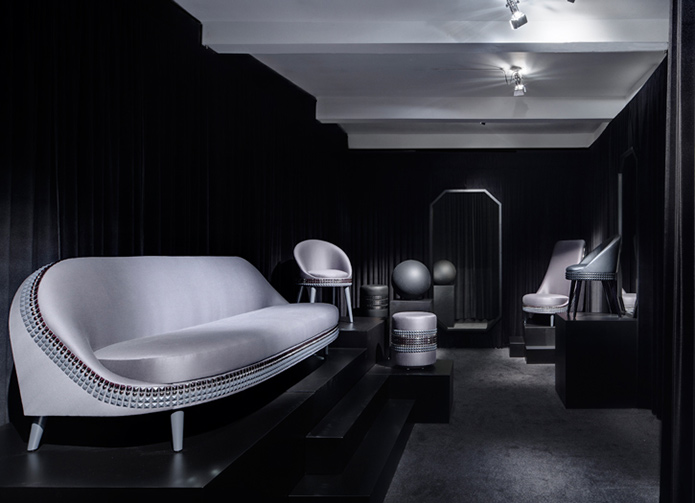 Broom’s theatre background would appear to have an influence on his thinking about design, particularly on his exhibitions and interiors. Spaces such as Christian Louboutin’s store at Harrods, an exhibition at London’s Lancaster House, and Broom’s ‘Salon’ range exhibition, have a certain amount of theatricality in their design and staging. They are akin to high fashion displays, with a sense of flamboyance, extravagance and self-assurance. 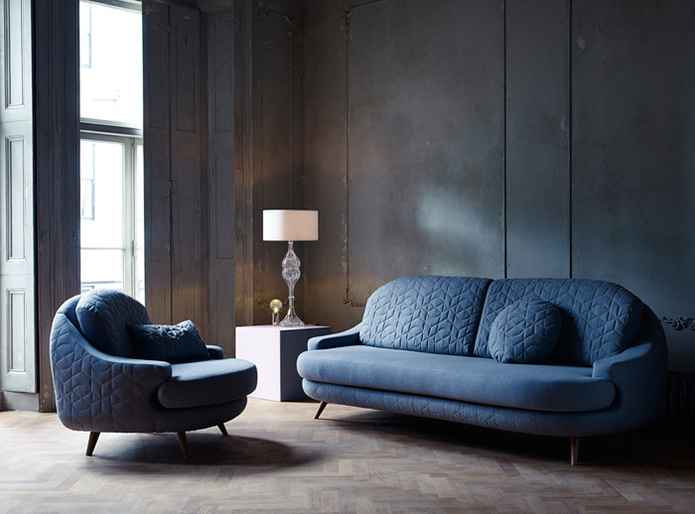 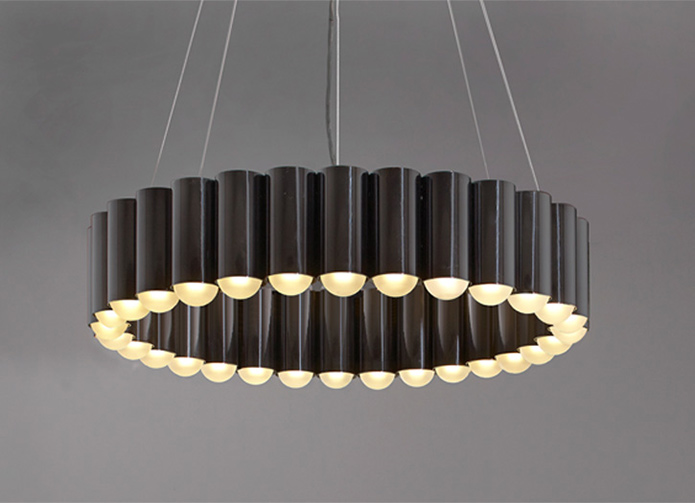 The Quilt armchair and sofa for British retailer Heal’s and Carousel pendant light, are Lee Broom’s most recent products. ‘Quilt’ takes its inspiration from the quilting process used for classic Chanel and Christian Dior luggage. ‘Carousel’ is inspired by the long-established British fairground merry-go-round; an impressive light, it has 30 cylinders and is finished in polished gunmetal grey.

Looking towards the future, Broom is eager to expand his portfolio: “I haven’t designed a hotel as yet so this is something I am keen to do. A major ambition of mine would also be to design and stage a pop concert. I think it would combine many of the disciplines I have learnt over the years such as theatre, fashion, lighting and interiors.” (Source)