A focus on the work of Danish design legend, Hans J. Wegner. 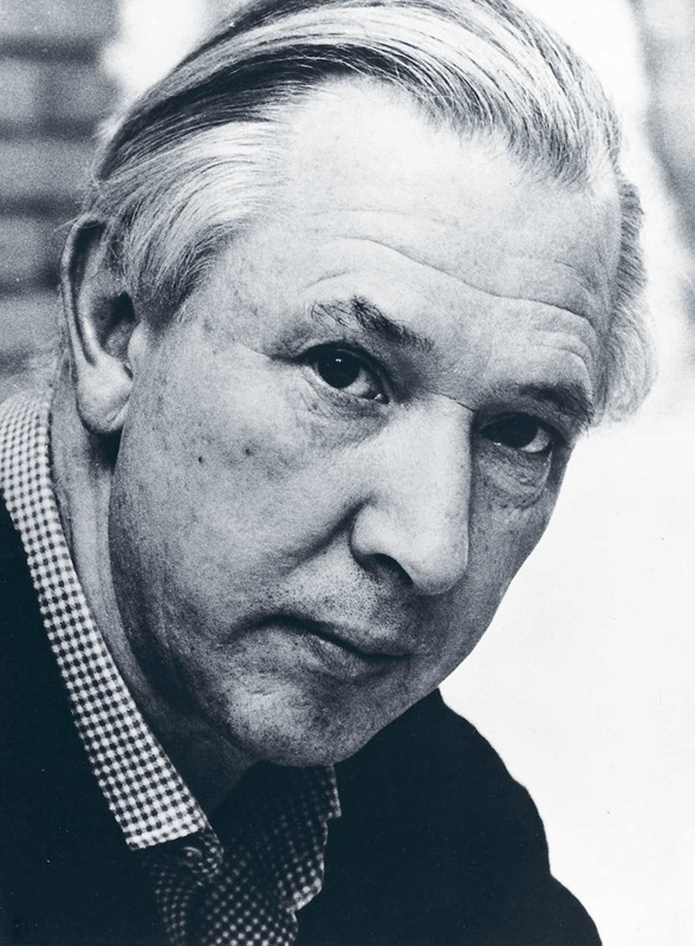 Hans Jørgensen Wegner – Hans J. Wegner – the celebrated Danish designer, was a master when it came to designing chairs. Incredibly, he designed more than 500 chairs during the course of his life. Through his ambitious designs, Wegner managed to make chairs that were complex and intricate to craft and produce, look exceptionally simple. His emphasis on functionality and aesthetic appeal resulted in a series of chair designs that are both distinctive and sculptural.

The son of a cobbler, Hans J. Wegner was born in Tønder, southern Denmark, in 1914. He made his first chair at the age of 15, became a carpenter’s apprentice at the age of 17 and trained as a cabinet maker. Wegner studied at Copenhagen’s School of Arts and Crafts from 1936-1938 (where he also later taught from 1946-1951), after which he undertook further studies in architecture. He worked on a project with Arne Jacobsen and Erik Møller from 1940-1943, hired to design furniture for the new City Hall in Aarhus, on the coast of east Jutland in Denmark. Wegner opened his own office in 1943 and was asked by Fritz Hansen for suggestions for their bentwood production. He subsequently designed the China Chair (still manufactured by Republic of Fritz Hansen). 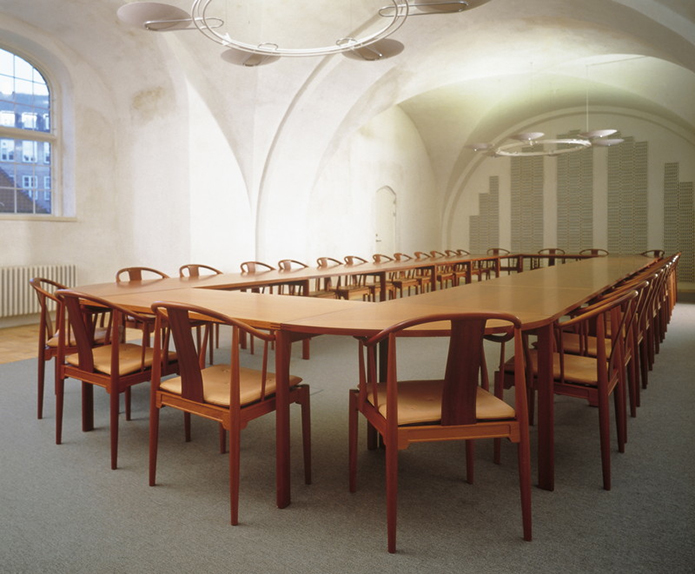 The China Chair in cherry and leather. Image © Republic of Fritz Hansen.

Hans J. Wegner’s designs have been produced by a number of furniture manufacturers, including, from 1940, the Danish furniture manufacturer Johannes Hansen. In 1968 Wegner was welcomed at PP Møbler, a family-owned Danish joinery workshop that, following the closure of Johannes Hansen in 1990, now produces many of Hans J. Wegner’s covetable designs. They include the Flag Halyard Chair, whose seat shape was conceived by Wegner whilst on a family holiday using sand, the Teddy Bear Chair and the Peacock Chair. 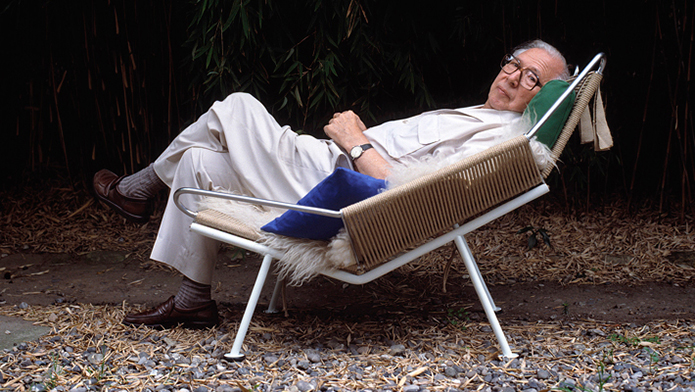 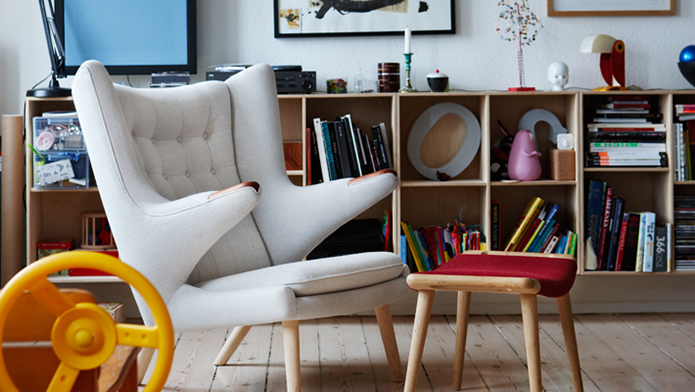 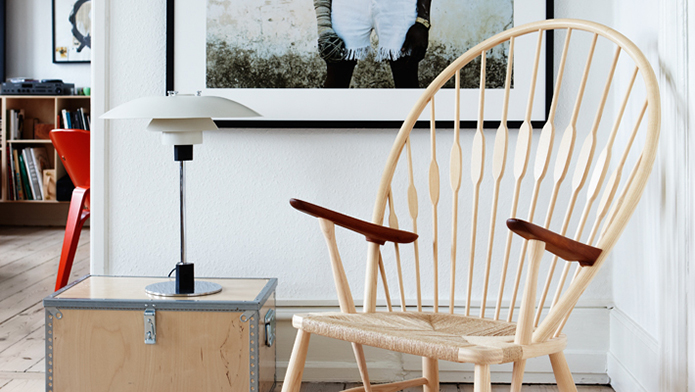 Hans J. Wegner’s many distinguished chair designs propelled him to success. The Round Chair, designed in 1949 and later known as The Chair, is a distinctly Danish piece. In 1950 America’s ‘Interiors’ magazine referred to ‘The Chair’ as “the most beautiful chair in the world” (source). The Round Chair epitomises the centuries old tradition of wood-working in Denmark and the skills of craftsmanship passed from one generation to the next. Wegner explained: “I have often been asked how we created the Danish Modern style. And I have to say that it was nothing like that – creating… I suppose that it was more an advanced process of purifying, and for me a simplification, cutting the elements down to the bare essentials: four legs, a seat and a combined top rail and arm rest” (source). Yet it was of course Wegner’s vision and skill that then united these elements to create each chair masterpiece. 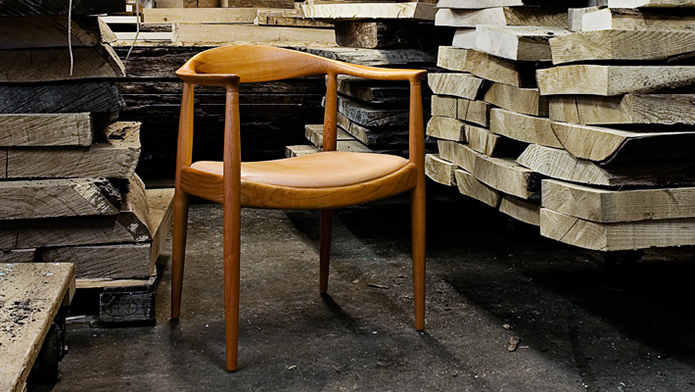 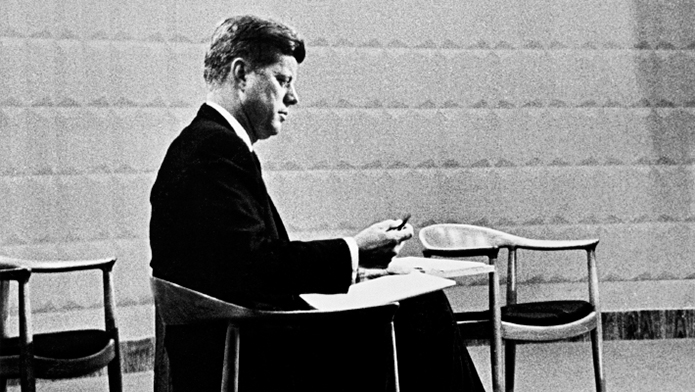 The Chair was used when John F. Kennedy and Richard Nixon met in the first ever televised election debate in 1960. Image © PP MØBLER.

One of Hans J. Wegner’s most significant collaborations began in 1949 with the Danish furniture manufacturer, Carl Hansen & Søn. Today the relationship between the Hans J. Wegner studio, run by his family, and Carl Hansen & Søn, continues to flourish. Carl Hansen & Søn produce some of Wegner’s finest designs including what many consider to be his most acclaimed, the Wishbone Chair designed in 1949. This iconic dining chair with its Y-shaped back has played a leading role in Danish design for the past 60+ years. 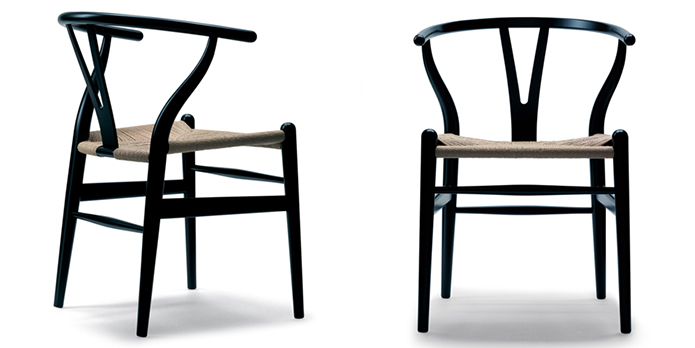 Given its continued relationship with the Hans J. Wegner studio, Carl Hansen & Søn has been able to reintroduce the discerning and wonderfully contemporary CH33 dining chair. Designed by Wegner for Carl Hanson & Søn in 1957, it was in production for ten years. Carl Hansen & Søn took a fresh look at the CH33 in 2012. With its positive appearance and charming character, this dynamic and modern dining chair can once again adorn many aesthetic dining tables. 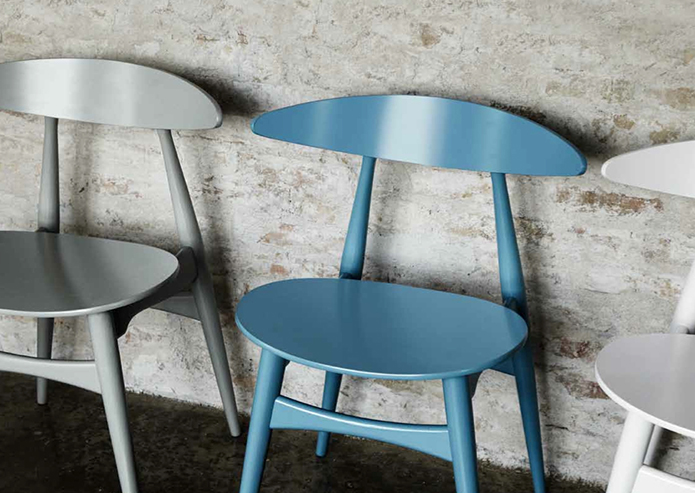 In terms of furniture design and production, particularly post World War II and mid-century, Denmark eclipsed its Nordic neighbours. Danish Modern spoke to the best of the genre. Hans J. Wegner was a leading luminary at that time, his work integral to the Danish Modern movement. Wegner was skilled at combining demanding joinery techniques with elegance in shape and form. In a sense he was a modernist, yet his approach provided a more organic, less rigid form of minimalism. An excellent example of this is the Shell Chair, arguably Wegner’s boldest modern iconic design. Designed in 1963, the Shell Chair, officially named the CH07 and also known as the smiling chair, is celebrating its 50th anniversary. Its sculptural frame is the epitome of minimalist expressionism. Yet the Shell Chair very nearly disappeared from view. 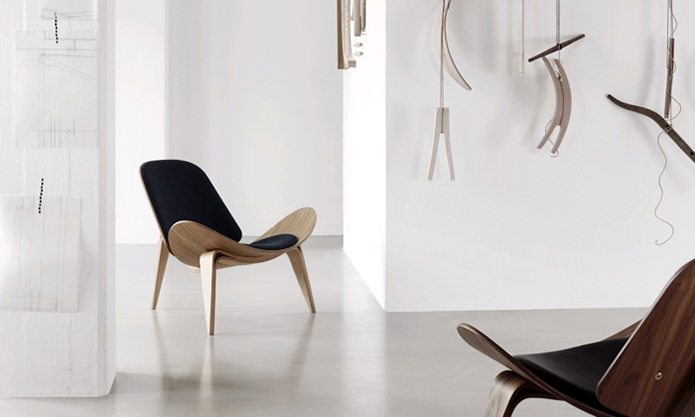 Presented by Hans J. Wegner at the Cabinet Makers’ Guild Furniture Exhibition on 20th September 1963, the Shell Chair’s launch received a mixed reception. Its silhouette was a futuristic one, both unique and modern and quite unlike anything seen before at that time. As such, architects and customers struggled to see how they would fit the Shell Chair into their projects and homes. Consequently only fifteen chairs were produced, the last two being given away as they proved too difficult to sell. An auction at Sotheby’s in London in 1997 was to change the Shell Chair’s fortunes. Two of the original 1963 chairs were each sold for £20,000 and Carl Hansen & Søn responded to this new interest by once again producing the Shell Chair. Still a somewhat irregular design, sales were measured at first, yet gradually this most urbane of chairs received its long overdue recognition. Today the Shell Chair is sold across the world, its demand the result of Hans J. Wegner’s visionary design genius.1 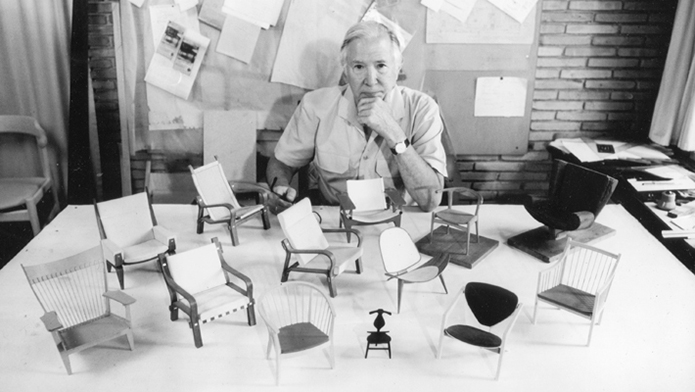 Hans J. Wegner is a designer who has transcended all forms of rampant consumerism, speculated trends and “here today, gone tomorrow” fads. His work quite simply prevails, remaining both honest and highly coveted. Wegner was the recipient of numerous awards and accolades throughout his years, including: an honorary member of The Royal Danish Academy of Fine Arts, an honorary doctorate from the Royal College of Art in London, receiver of the 8th International Design Award in Osaka, Japan. Yet perhaps his best reward is the continued prominence of and love for his furniture designs.

Hans J. Wegner died in 2007, but his design legacy and visionary foresight still prosper. With chair designs that are both mid-century and contemporary, his continued presence and place in modern design is assured. 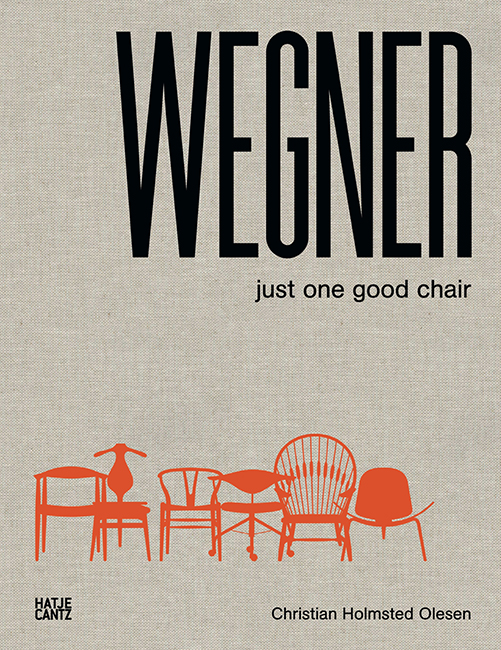 Designmuseum Danmark is commemorating the 100-year anniversary of Hans J. Wegner’s birth with a considerable exhibition entitled Wegner – Just One Good Chair (A book by the same name is also available). In 1952 Wegner remarked: “If only you could design just one good chair in your life . . . But you simply cannot.” Wegner of course designed a great number of good chairs in a manner that gave prominence to both the chair’s usefulness and its poetry (whether Wegner would agree with this is debatable). Consequently it is suggested, with much credence, that “Wegner in many ways represents a more human route into modernism.” (Source: Press Release from Designmuseum Danmark). His designs are exceptionally sensual yet rational, offering an artistic expressionism and a type of escapism that is grounded in honest values.

Japanese Knifemaker: A craft started 700 years ago Exploring the Plight of the Honey Bee