An overview of the work of Danish design luminary, Arne Jacobsen. 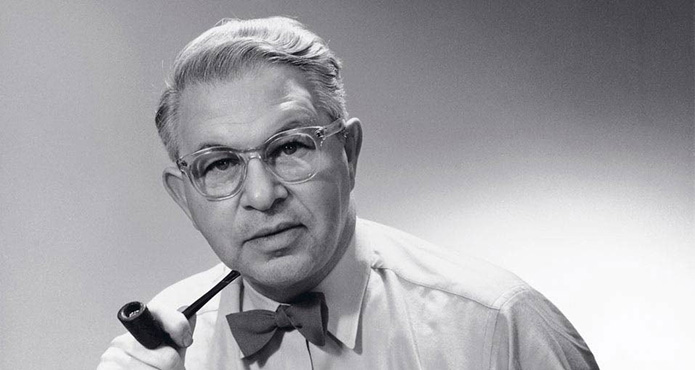 “It may sound affected, but it is the act of creation itself, and it is equally exhilarating whether one is working on a teaspoon or a national bank.” (Arne Jacobsen on design; Source).

Arne Jacobsen, born in Copenhagen in 1902, was and is to all intents and purposes a Danish design prodigy. He enjoyed artistic endeavours as a child, having an incredible talent for drawing and in truth wanted to be a painter; his father believed that architecture was a better route to take and the more realistic choice. That said, Jacobsen was later able to bring his flair for painting and drawing to his design creativity. There was a “distinct accuracy and striking likeness of his drawings with [a project’s] end-result.” (Source) Jacobsen was educated at the School of Architecture in Copenhagen’s Royal Danish Academy of Fine Arts and graduated in 1927.

Jacobsen, a principal figure in modern Danish design and architecture, was a designer whose eminence is defined by his body of work and its place in many of today’s contemporary settings. Jacobsen’s design journey was one influenced by distinguished movements, from the Bauhaus to international modernism. Reciprocally, his own work will have inspired such movements and indeed others besides. 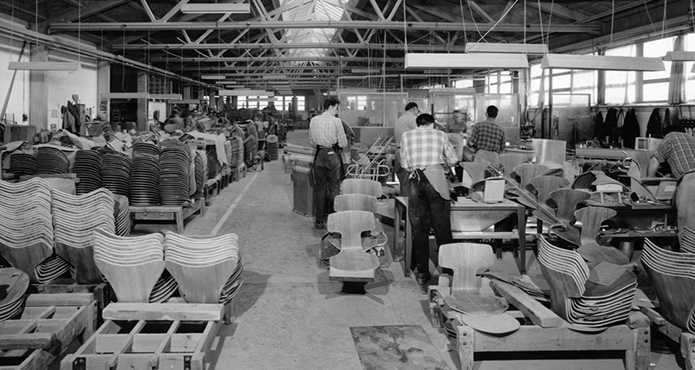 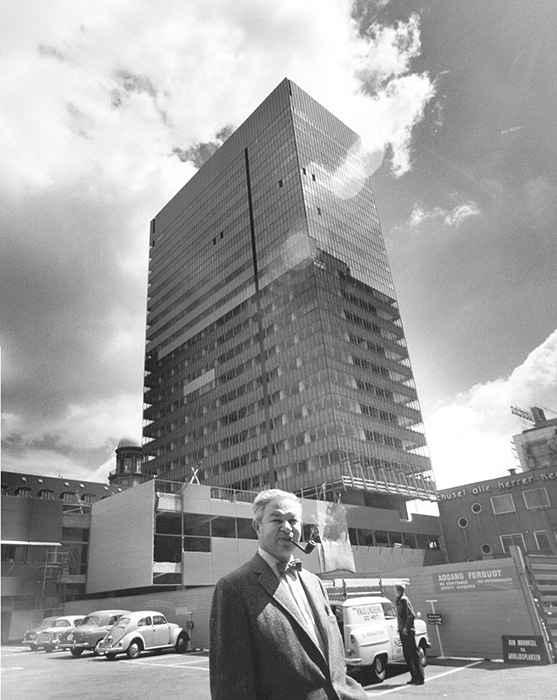 Arne Jacobsen had a comparatively small studio staff when measured against the immensity of design commissions. Added to this, he was a perfectionist with a keen eye for detail who managed a span of projects, from designing large buildings to pieces of cutlery. Interestingly, Jacobsen was by nature an intuitive designer. Except for a basic concept, he seldom knew what he wanted ahead of time when focused on a design, working intuitively to understand the design’s overall limits – from how far it could be pushed to the materials that would be most appropriate in its composition. Often working inexhaustibly with a design, Jacobsen would find it hard to let go. Consequently, various stages of production would experience delays; perhaps to be expected from a someone who was a “perfectionist modernist, to whom no detail was trivial.” (Source) 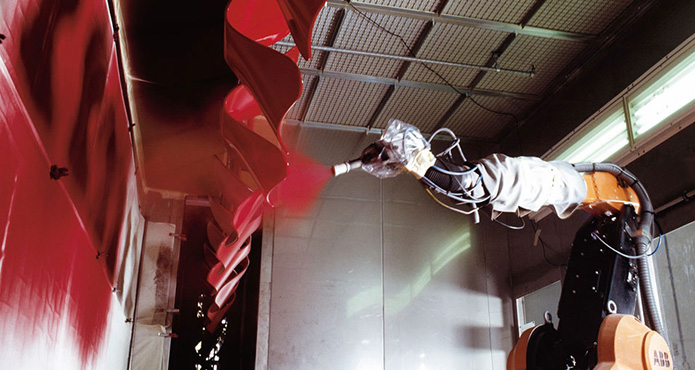 Jacobsen was also known for his humour and self-deprecation, and was a cheerful family man. Despite this, his predilection for perfectionism was still evident in the family home: “coffee cups were lined up in neat, geometrical rows, and the children’s toys put away when Jacobsen finally returned from the studio.” (Source) He was a keen botanist and enjoyed the more aberrant aesthetic that nature presented when compared with his idiosyncratic style; it was an escape from his own self-inflicted limitations. And whilst Jacobsen enjoyed the pleasures of a delectable pastry, aesthetically it had to look right in order for it to taste good. “A pastry usually tastes better if it looks nice. A cream pastry, now that looks nice – in fact, there is nothing I mind as long as it looks nice.” (A quote by Arne Jacobsen). 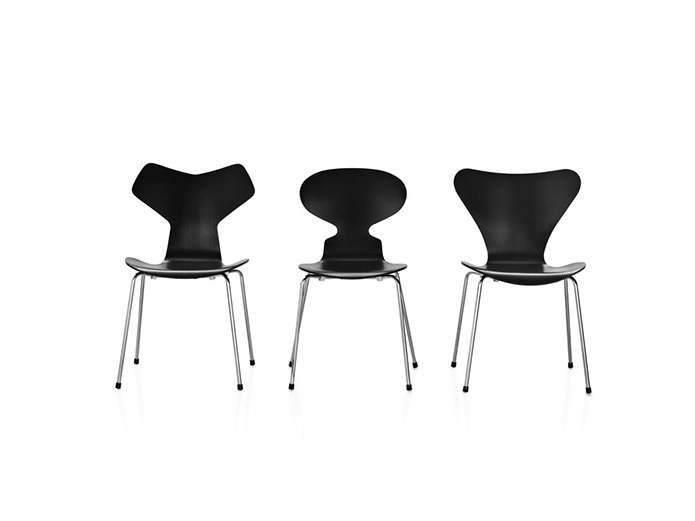 During the 1950s, Arne Jacobsen became more and more interested in product design and was in part influenced by the work of Charles & Ray Eames. Collaborating with renowned Danish furniture manufacturer Fritz Hansen (also known as Republic of Fritz Hansen) since 1934, Jacobsen would enjoy a real breakthrough in 1952 with his laminated Ant™ chair. Ant™ gave rise in 1955 to the Series 7™ chair. Series 7™ was to become a classic, propelling the name of Arne Jacobson and Fritz Hansen to furniture stardom. It is the most sold chair in the history of Fritz Hansen and remains one of the most popular chairs of its era, no doubt in part due to its timeless aesthetic, contemporary fit and adaptability to modern living. Fritz Hansen introduced Jacobsen’s Grand Prix™ chair in 1957. It received the ‘Grand Prix’ at the XI La Triennale di Milano that year and was another in a series of pressure moulded veneer chairs. Republic of Fritz Hansen will re-launch the Grand Prix™ in spring 2014. 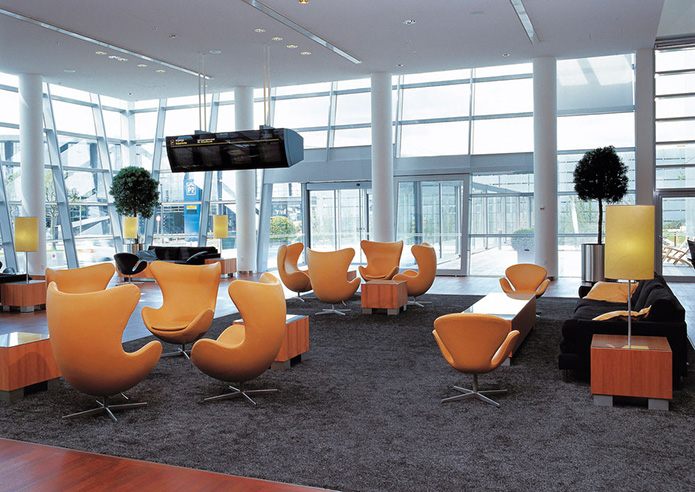 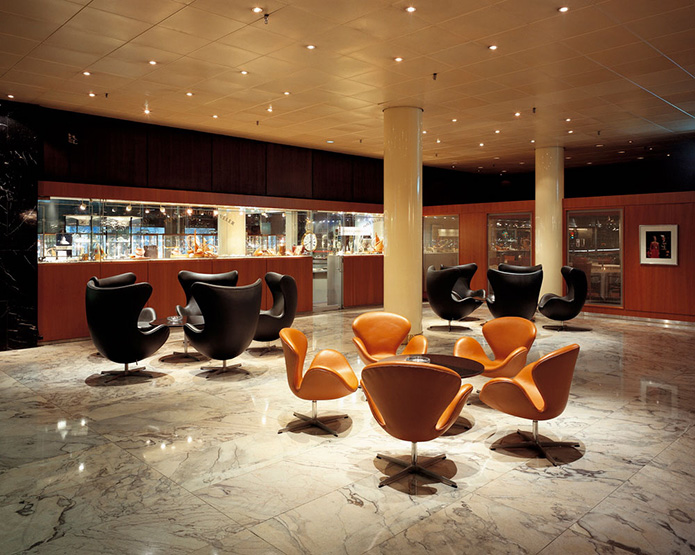 Egg™ & Swan™. Image is from the lobby at the SAS Royal Hotel in Copenhagen. Image © Republic of Fritz Hansen.

As an architect, Jacobsen completed a great many commissions, from private homes to town halls. Amongst his finest architectural accomplishments are: SAS Royal Hotel Copenhagen (1958-1960); Danmarks Nationalbank (started in 1965 and completed after his death) and Saint Catherine’s College in Oxford (1964-66). The SAS Royal Hotel allowed Jacobsen to integrate both design and architecture on a grand scale. The building of the Scandinavian Airlines System (also known as SAS House) was both a hotel and integrated airline terminal where SAS guests could check-in for their flight before boarding a shuttle service to the airport. The image is one that conjures notions of how stylish air travel once was. Jacobsen designed every element of the hotel, from its structure to the ceramic ashtrays to the stainless steel cutlery. From the SAS commission emerged two celebrated and classic chairs: the Egg™ (1958) and the Swan™ (1958), both designed for the hotel’s lobby, lounge and reception areas. The two chairs were technological innovations for their time, having no straight lines and only curves. The Swan Sofa™ (1958), based on the Swan™ chair’s curves, was created to furnish the hotel’s suites, lounges and restaurant. The über-cool, refined, yet somewhat aloof 3300™ series, with its clean lines and perfect proportions, was designed for the airline terminal. 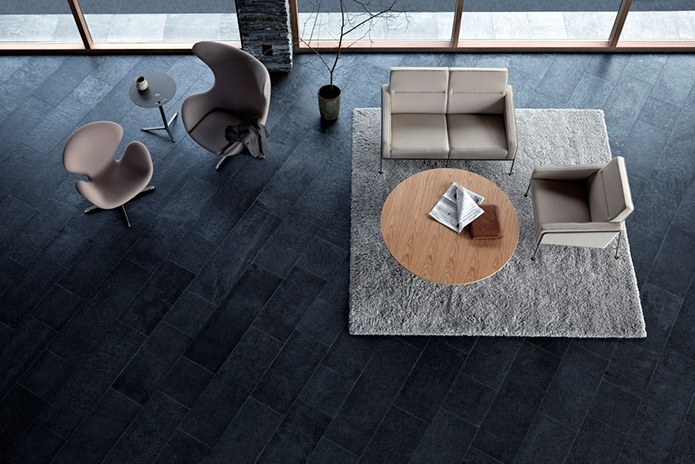 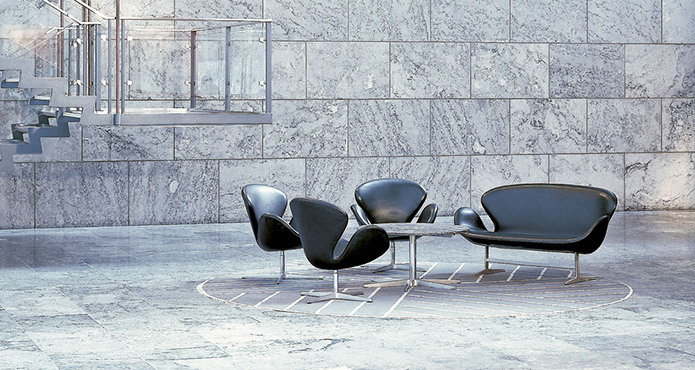 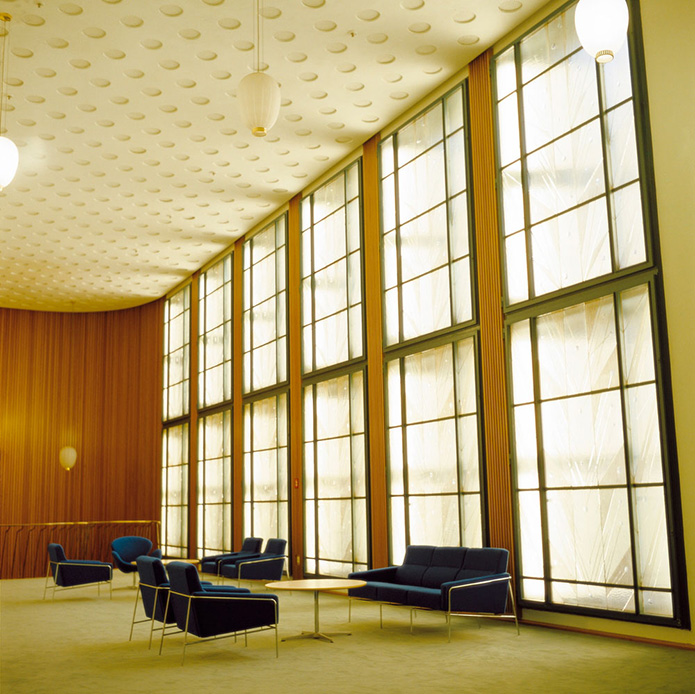 Sadly, the interiors of Jacobsen’s modernist masterpiece have undergone a “stylistic assault.” (ICON 086, August 2010) Now the Radisson Blu Royal Hotel, interiors once reminiscent of a midcentury jet age, have succumbed to the kind of blandness found in chain hotels throughout the world. Only one room, number 606, maintains Jacobsen’s original design vision and can still be booked by guests. 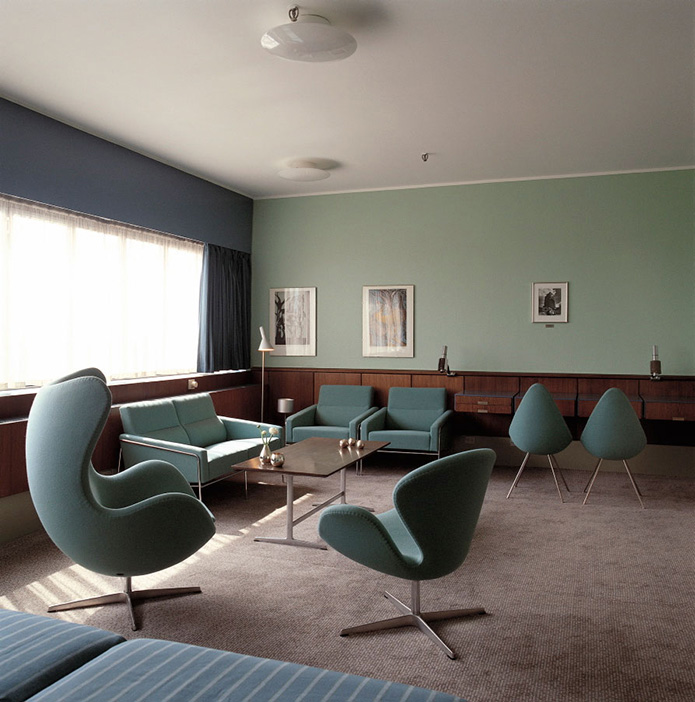 Room 606 in the SAS Royal Hotel in Copenhagen includes the Egg™, the Swan™ & Series 3300™. Image © Republic of Fritz Hansen. 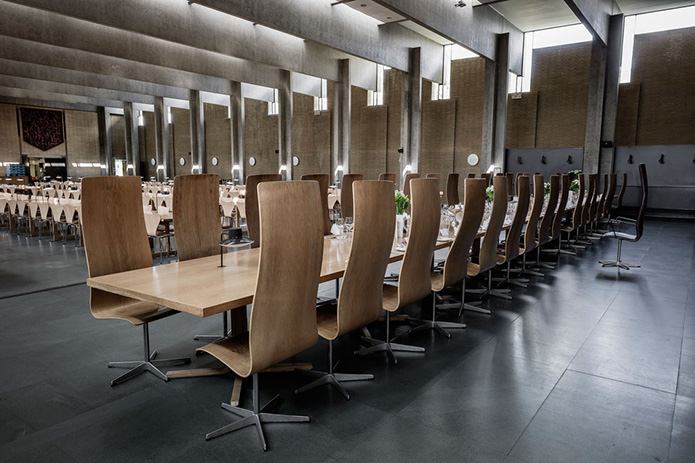 Jacobsen’s model for the SAS Royal Hotel and schools he had built in and around Copenhagen, convinced Oxford academics, in search for an architect for an extension to St. Catherine’s College, that he was their perfect candidate. As with the Royal Hotel, Jacobsen designed every element – the buildings, garden, fixtures and fittings. The stunning Oxford™ Chair was designed for professors at the college in 1963. Whilst there was an initial furore over the commission of a Danish modernist to design St. Catherine’s, as opposed to employing a British architect, Jacobsen’s accomplishments did earn him an honorary doctorate from Oxford. 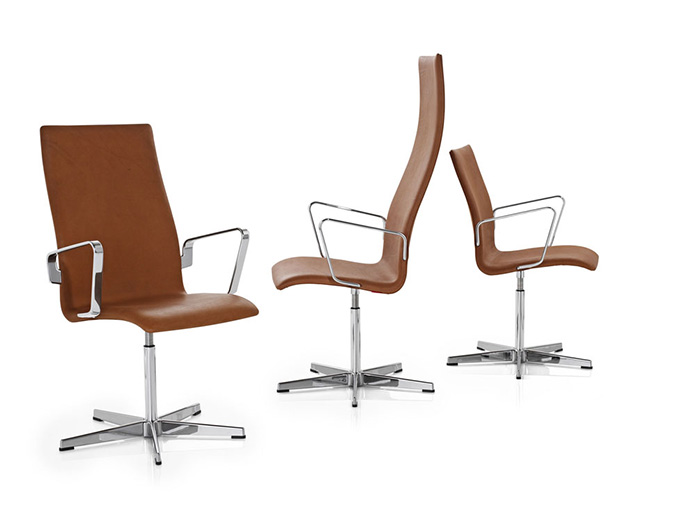 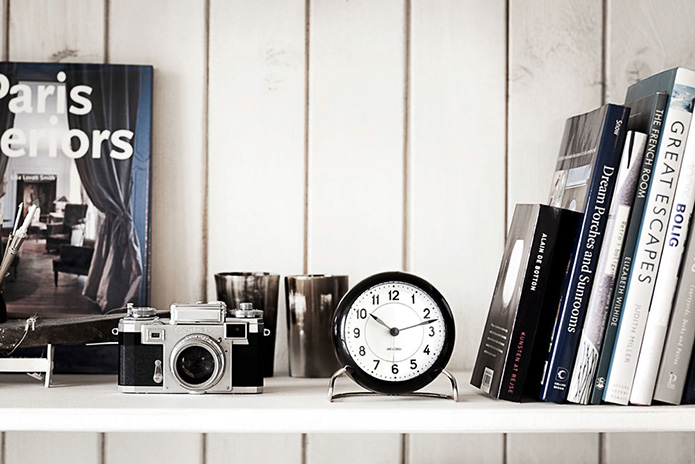 Arne Jacobsen’s body of work is overwhelmingly impressive. In addition to the aforementioned designs, the following designs are noteworthy: 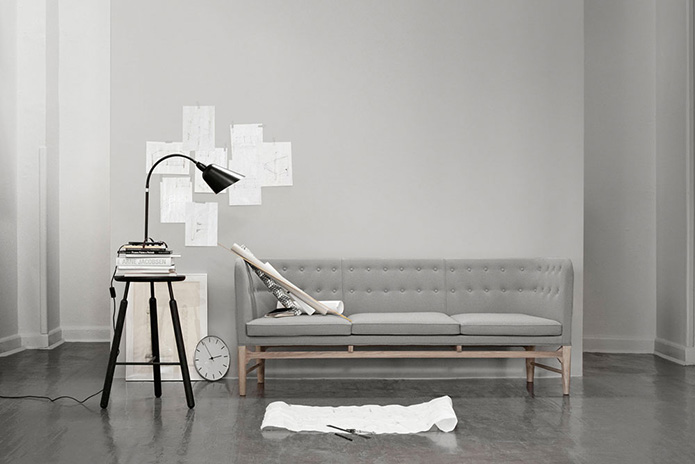 Arne Jacobsen died in Copenhagen in 1971, aged just 69. He left behind an absorbing, aesthetic, innovative, classic and enduring design legacy. Designs such as the Egg™, Swan™ and Series 7™ are as popular as ever and marry well with contemporary 21st century living. In the annals of midcentury modern design, Arne Jacobsen is a deservedly prominent master.

Gerard McGuickin is a freelance design writer and a blogger for his online zine, Walnut Grey Design. He writes intelligently about ‘good design’ from the viewpoint of interiors, architecture, objects and lifestyle. Gerard has a specialist interest in modern contemporary and mid-century Nordic and British design.