Hunting for Prawns, by Rob Yorke

Rob Yorke's summer expedition to the beach with a secret weapon and harvest to die for. 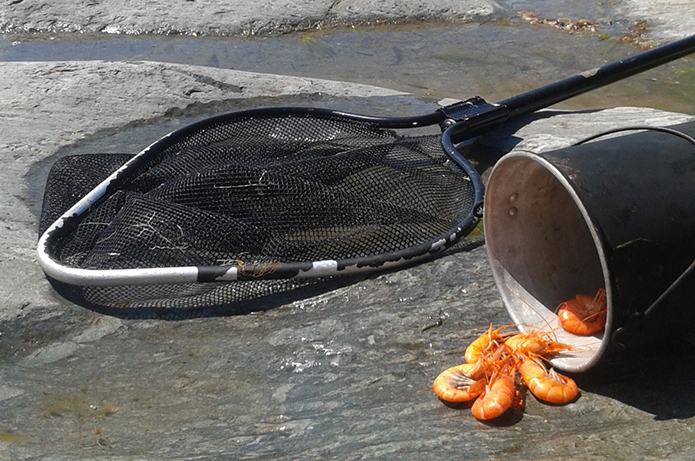 When hunting prawns, you’re never alone. Herons, sandpipers, various gulls, and even crows all wait for low tide. That’s when the seashore offers up its goods and while the birds may have their beaks, we have our nets and possibly even a secret weapon up our sleeve.  It’s time to hasten down to a rocky coastline near you on a prawn hunting expedition.

The place to catch a prawn is a sandy beach with plenty of seaweed filled rocky pools over which, at hide tide, waves crash against a stony shore but once the waters turn, reveal sandy bottomed pools studded with rocks enveloped by wavy mats of seaweed. This is the crustacean’s world. Lobsters and edible crabs maybe out of reach but prawns up to four inches in length abound, ready to be lured out of deep lairs and tempted from weedy caves. 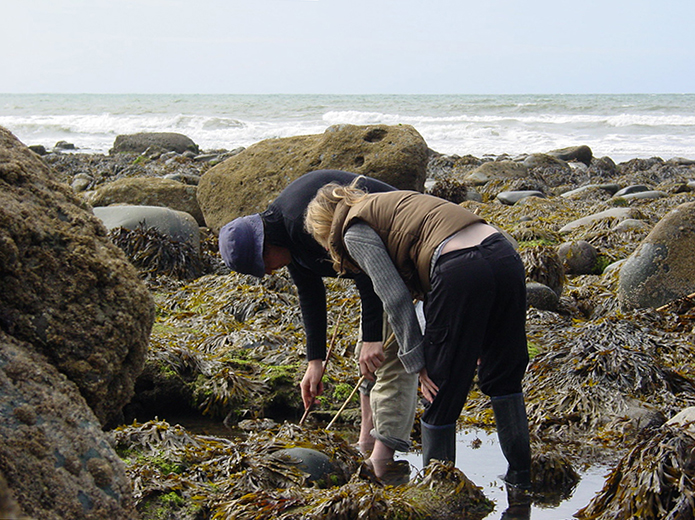 The best time to venture after them is from July to September when the sun is high and the water warm. The kit required is simple. Firstly the prawn hunter: long sleeved shirt, shorts, hat and old pair of plimsolls are de rigeur; with the latter crucial in being able to go anywhere, to any depth as well as gripping, as best possible, wet slippery rocks. Wellington boots are a poor substitute and to understand your prey, you have to accept that you might get very wet. As prawns live in awkward places, a strong back and sense of balance are an advantage. Implements; fine meshed nets of differing sizes on strong canes, a couple of saucepans, stove and matches are all that are required. Butter and garlic are luxury items but well worth packing if you feel optimistic. For the connoisseur prawn hunter, the secret weapon consists of a shiny dessert spoon tied securely on the end of sturdy four foot long cane. 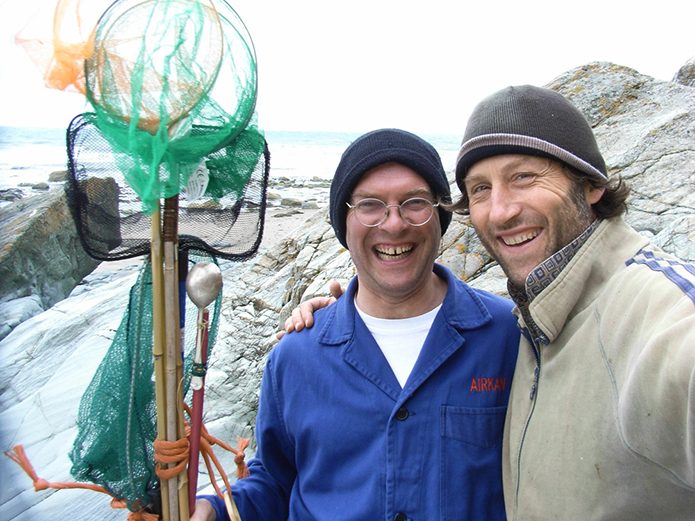 Travel as light as you can, as many of the beaches are almost inaccessible. The sea, having eroded the land away, depositing an ankle twisting array of stones at the base of a cliff, makes clambering down to the shore tricky. Once base camp is set, survey the prawn’s domain. Seaward, the landscape is ever changing – barnacle encrusted rocks dot the shoreline, sandy sucking tides flow in and out of pools. Shoreward, heather banked, dry grassy hills provide a dramatic backdrop to the setting. 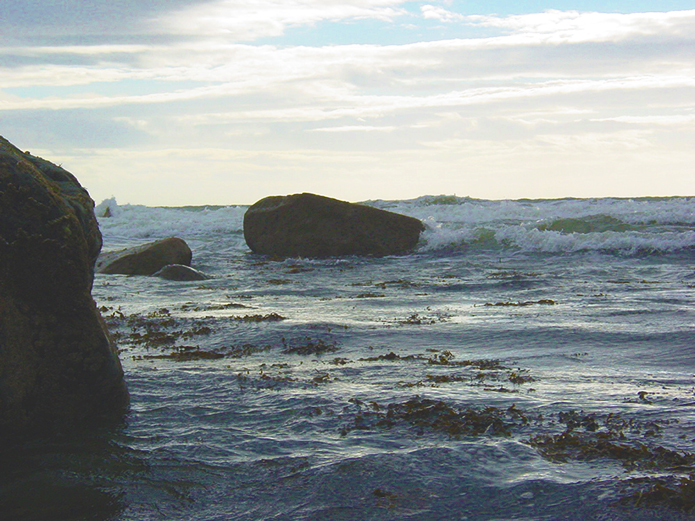 As the tide retreats, exposing pools as it goes, tread warily on seaweed smothered stones and head towards the pools. But you must first find your bait. Prawns are omnivores; but are especially partial to meat, whether dead or alive, and stepping into the water, don’t be alarmed by the sensation of tiny pincers nibbling your bare legs. It goes with the territory; what in fact they’re after, is a well smashed limpet and any stone will assist you in removing one from the side of a rock. After depositing mashed limpets into a number of nets, each weighed down with a stone, position them in different pools and then retire to base camp. The next hour or so can be spent either lying on the beach, snoozing. Alternatively, you may wish to actively hunt the prawn. 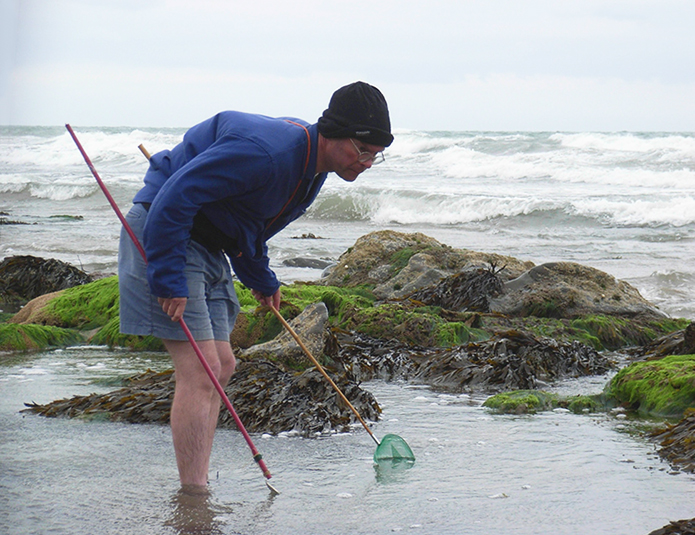 There are two methods. One is broadbrush in its approach and involves sweeping a net under billowing fonds of seaweed hoping to scoop up an unwary prawn. But be warned. These crustaceans are canny creatures, moving fast, utilising their swimmerets, they can dart away from any fearsome looking object, disappearing under rocks or into impregnable banks of weed. 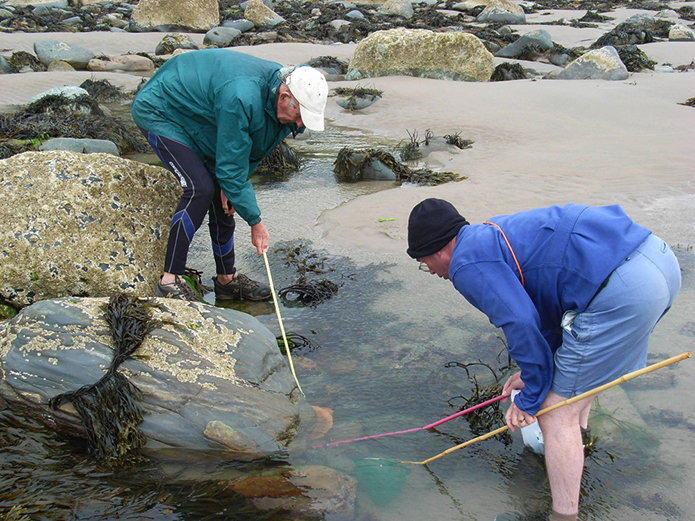 Playing on the prawn’s fear of the unknown object, the other method, more refined, utilises the secret weapon and is more properly known as the spoon technique. Enter the rock pool as a heron would. Stealthily. With net in one hand, spoon-on-the-stick in the other, gently place the net at one end of a dark crevice or rock. Then move the spoon slowly under the ledge or rock towards the net, probing into the unseen darkness while being prepared for the unexpected. Prawns, crabs and fish, all lurking deep in the recesses, will back away from the shiny spoon, perhaps thinking it’s an open mouth of a predatory fish, and edgily retreat backwards towards the net.

Although this is the way to catch larger prawns, they are most unpredictable. Many won’t agree to just backing into your waiting trap, and turning on their fanned tails, their pincers will feel out the side of your stationary net. Hold for a moment and then gradually advance with subtle wrist action, pushing them over the net. Once over the net, sweep it upwards with a clean fast action at the same time ensuring that the prawn or prawns don’t jump out of the net. Skill in deftness and patience are a virtue in hunting these nervous beasts. At this stage, the prawns must be kept alive and this is best done by placing them, with a handful of seaweed, into a plastic bag or old tennis ball holder hitched to the waist or hung around the neck. 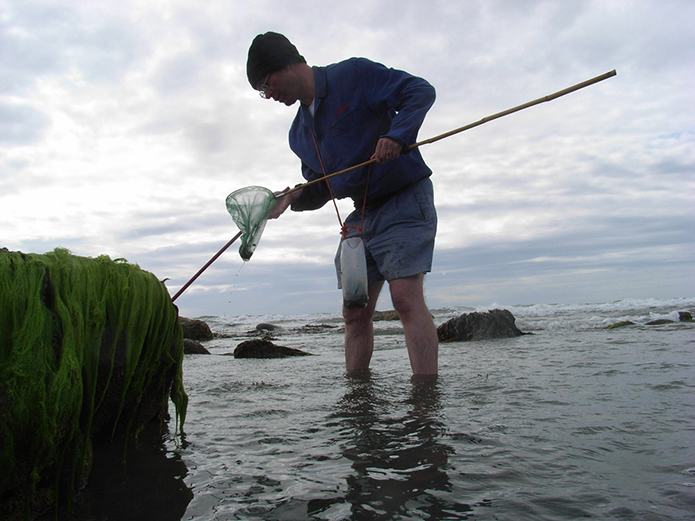 After the adrenaline and missed chances of the spoon technique, it’s time to return to the static traps and quietly approaching the baited pools, you may find the area around the nets humming with prawns of varying sizes. If confident, you could try herding the suspicious ones into the net to join those already feasting on the limpets. But be warned, you may get your comeuppance by losing the lot ! Better to perhaps seize the net’s handle, lifting promptly, for after prawns depart water, they can jump or more likely flip, some distance. Once you feel you have enough to eat, make your way back, victorious, to the hungry gang at base camp, ready to eat your hunter gathered harvest. 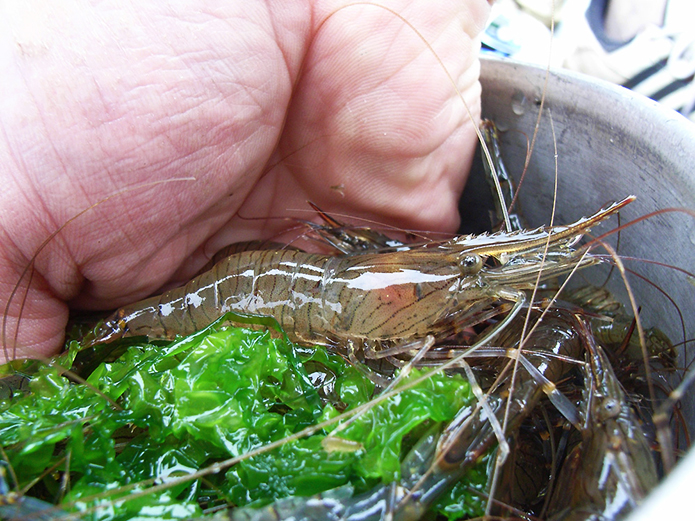 But first, having spent the last few hours bent double peering into glassy pools, it’s time to look at what’s going on around you. On one occasion, while prawning intently, I heard the distinctive call of a chough and looking up, saw it, red booted and spurred, rooting around the crumbling soil cliffs above me. Birds of prey often inhabit shorelines. Peregrines, kestrels and the odd merlin may wheel overhead while buzzards catch a cliff top thermal. Closer at hand, oystercatchers search for lazy mussels and the ubiquitous, always hungry herring gull keeps a beady eye on your activities. 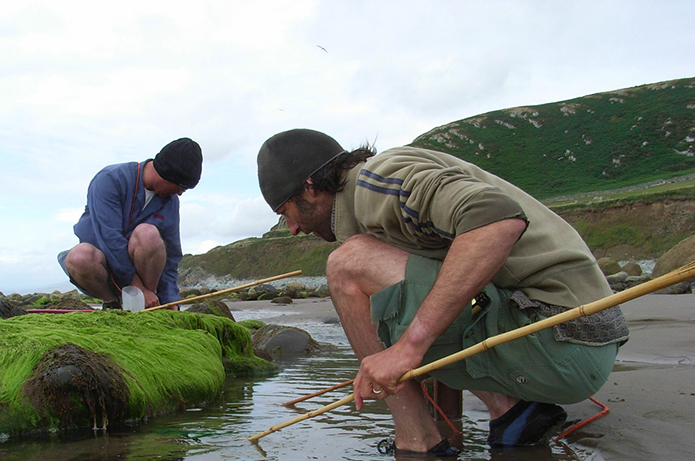 With something so fresh, only the lightest cooking is required to appreciate their delicate flavour. In the perfect world, your non-prawning friends might have built a fire from driftwood but if no suitable wood is available, use something like a simple meths burner to boil sea water into which the prawns are quickly dropped. Their translucent bodies turning a light pink colour almost immediately are ready for consumption as soon as you can hoist them out of the water. 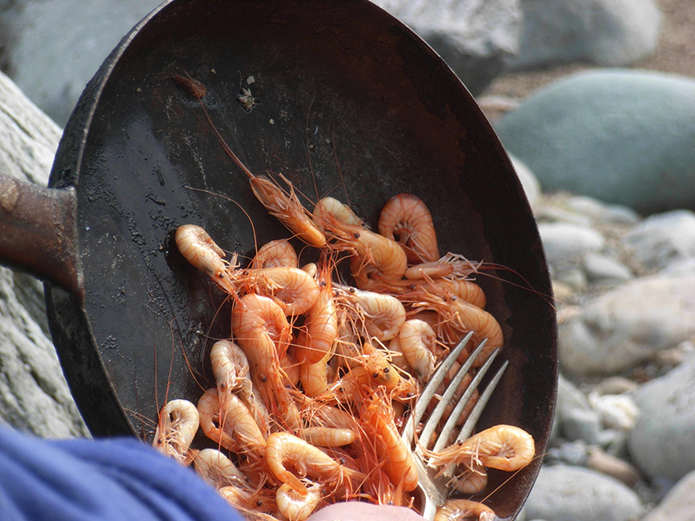 Not to waste a single taste, I sometimes eat the whole creature, crunching the sharp rostrum along with juicy flesh – all part of the ultimate salty crispy prawn. If you’re really organised, a frying pan may be on the go in which garlic and butter, gently simmering, will splatter hot fat everywhere as just cooked pink prawns are lobbed into the pan. 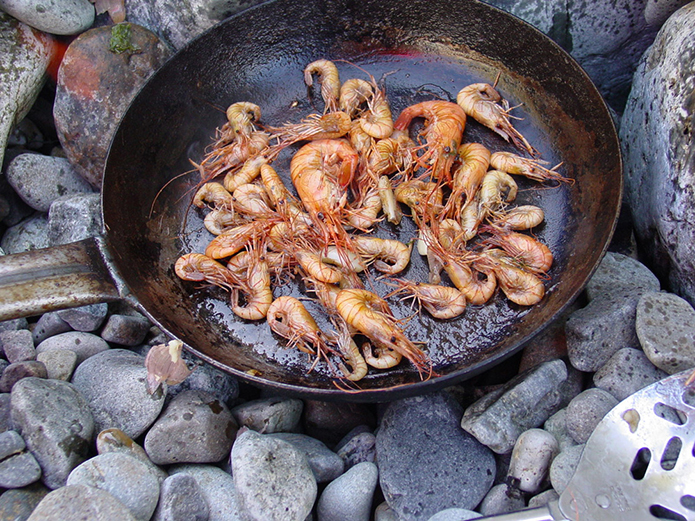 Eat the prawns with fingers or sharpened bleached driftwood sticks and, as the all consuming tide submerges the pools, sit back on your haunches, mesmerised by the sea, enjoying one of the most mouth watering, satisfying feasts known to humankind. 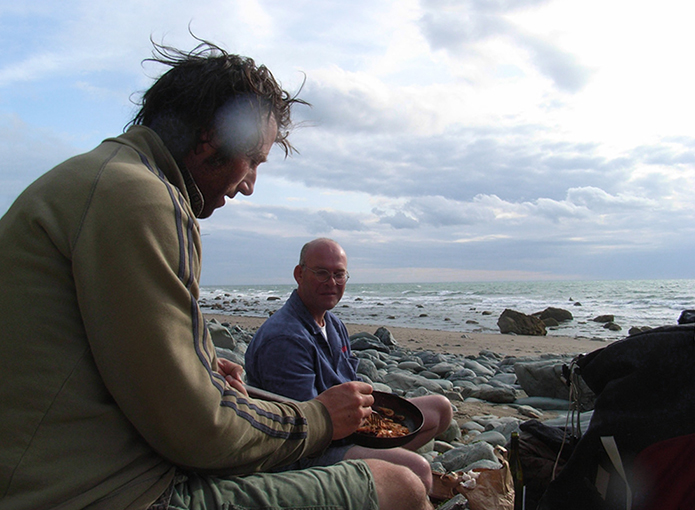 1. Larger prawns may be caught scavenging in front of an incoming tide but time is of an essence and you will get very wet.
2. Work a pool towards the largest rock where the prawns will seek refuge.
3. Don’t keep small prawns under an inch in length or those carrying eggs (before July).
4. A bright sunny, windless day is best for spotting prawns.
5. The spoon technique is, once acquired, mildly addictive.
6. Know your tidetables and beware hidden channels that fill on an incoming tide. Always be aware of your route off the beach.
7. Prawns cooked over open driftwood fires taste best.
8. Leave no evidence of your hunt and tell no one of your secret haunts. 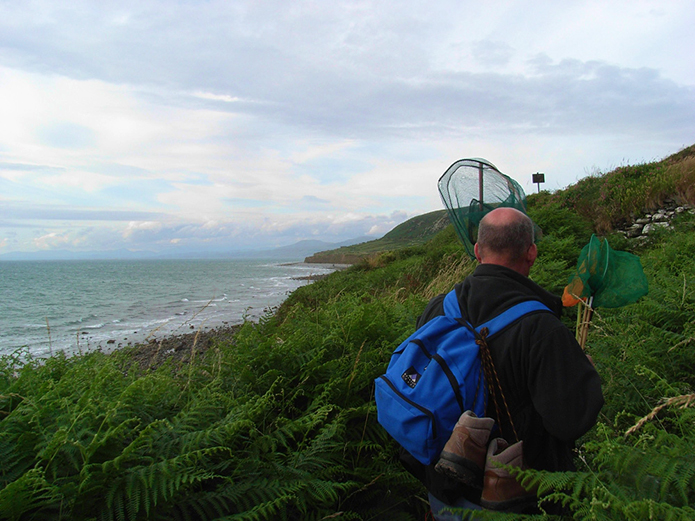 Rob Yorke is a countryman with two hats: one as a chartered surveyor, and the other as a rural commentator chairing debates and writing articles on wildlife, fishing, conservation, farming, shooting and other rural topics for the likes of The Times, Trout & Salmon, Waterlog, Shooting Gazette and BBC Countryfile Magazine. Rob compiled The Little Book of Fishing for WH Smith, and has presented two series for Discovery television channel: ‘The Great Escape’, a Welsh farmstead reality series, and ‘Reel Wars’, a fishing/outdoor survival series. He has lived in west Scotland, north England, London and now permanently in the Brecon Beacons. A regular contributor to the The Times’ letter pages on countryside matters, Rob can be followed at twitter.com/blackgull and via his website: robyorke.co.uk.