Traditional Skills: How to Split Kindling

Learn how to split kindling with this instructional article by woodsman Vince Thurkettle. 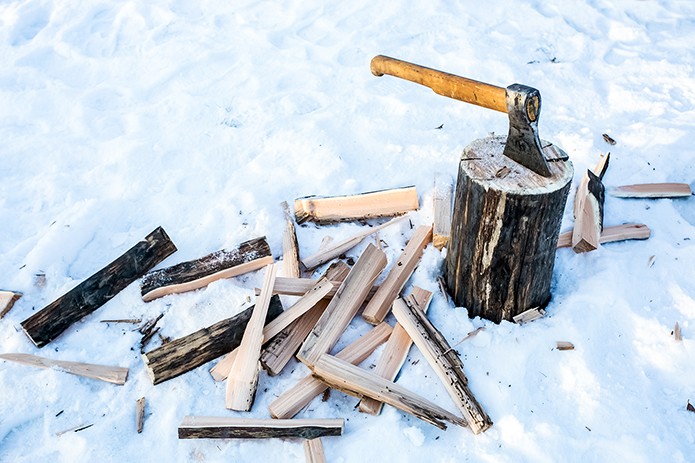 The Delight of Kindling

The ubiquitous petroleum-based firelighter has to a large extent replaced traditional kindling in fire lighting, both in the home and with the summer barbecue. This is a pity. I take a great, almost childlike, pleasure in my kindling. I think the appeal is simply the enormously wide variety of split wood, sticks, bark, peel, cones, cardboard and paper that all find their way into my store of kindling. In truth, my wood basket is aesthetically beautiful with its neat pile of clean logs arranged with carefullest carelessness – my kindling basket, however, looks more like a waste bin! 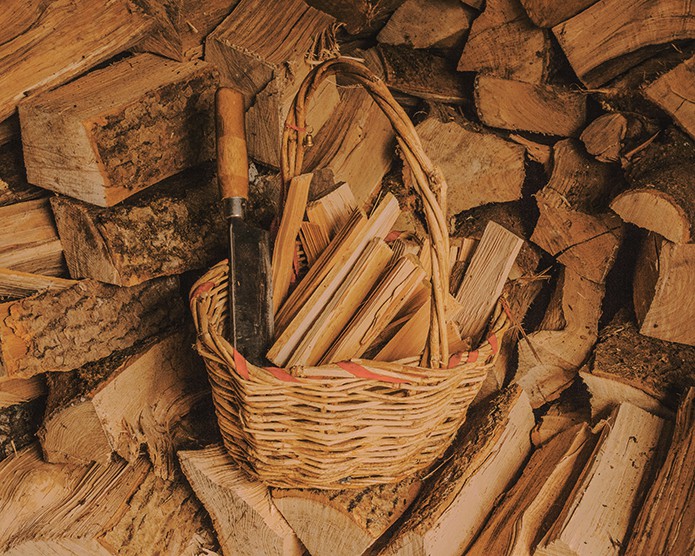 There is a small cost saving to be had by not using firelighters, and an environmental argument in favour of using traditional materials. But, while I believe in both of these, my main motivation is simply that I enjoy being alert to every fallen twig, every knot free perfect log and the myriad scraps of clean inflammable material that can be garnered from my home and local countryside. I am not an absolute purist and do sometimes resort to firelighters, but the delight of kindling soon wins me back again. 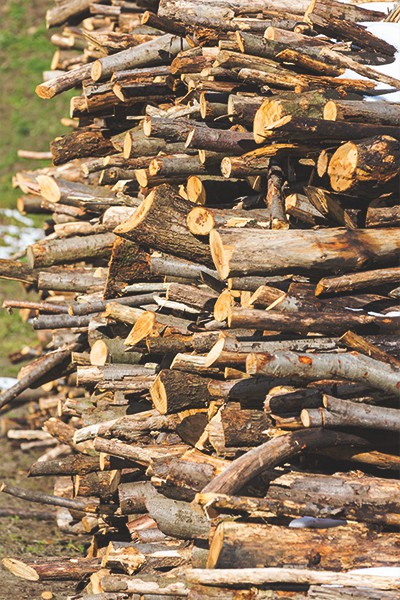 The word kindling covers all the material that builds your fire from the tiny flame of the first match to the main logs, or coal, catching fire. I tend to split my kindling materials, physically and mentally, into two classes – pre-kindling and kindling. There are four stages to lighting a wood fire: the struck match, the pre-kindling, the kindling and the main fuel logs. I am writing this with the home in mind and so am not considering starting a fire with friction or sparks. My pre-kindling comprises those materials which will readily catch fire from the match’s flame – such as cardboard and paper, birch bark and dried orange peel. My kindling is a mixture of split wood and sticks gathered from the garden, hedgerows and woodland.

I tend not to use any recycled wood that has been treated with paint or preservatives. I have no desire to release a cocktail of noxious metallic and organic compounds into the air around my home.

There is not too much to say here as I think it is largely self-evident. But I would just note that it is better to gather straight sticks, as they will pack more tightly in the kindling basket and leave anything that is showing signs of rot – partly decomposed wood tends to smoulder rather than burn with a flame. Beech sticks are my favourite by far: best when the bark has come off and they are bleached white like bones – dead hedgerow elm sticks are very good too. Beech is the crème de la crème of kindling and was a favourite of Laurie Lee. As a boy he gathered beech sticks, ‘brittle as candy’ for his mother – he lived before the plague of Dutch Elm disease reduced our mighty elm trees to little more than hedgerow shrubs, that die regularly. 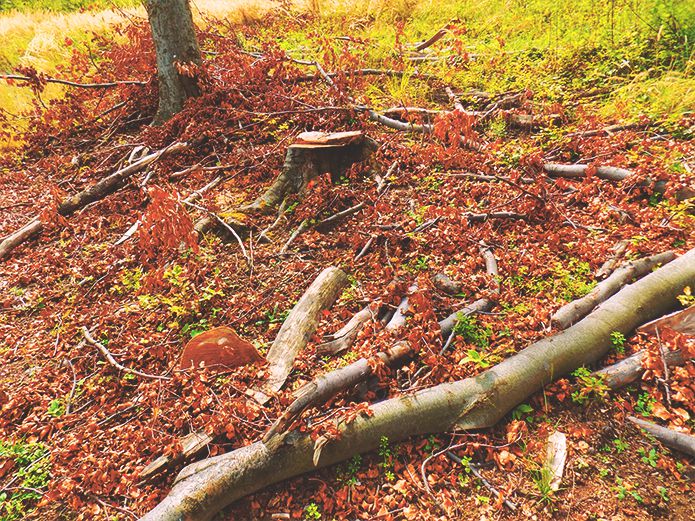 The Best Logs for Making Kindling

It is important that logs that are to be split into kindling are fully seasoned, straight grained and completely knot free. I find a mixture of kindling sizes is helpful when lighting the fire and choose logs of between 5 and 8 inches (12-20 cm) length. I prefer logs with a diameter of around 9 inches (23 cm) or less as I find these easiest to work with. Logs wider than this are much harder to split into the narrow ‘boards’ that are then split into sticks of kindling. My kindling sticks range in diameter from half an inch to about 1 1/2 inches (12-35 mm). 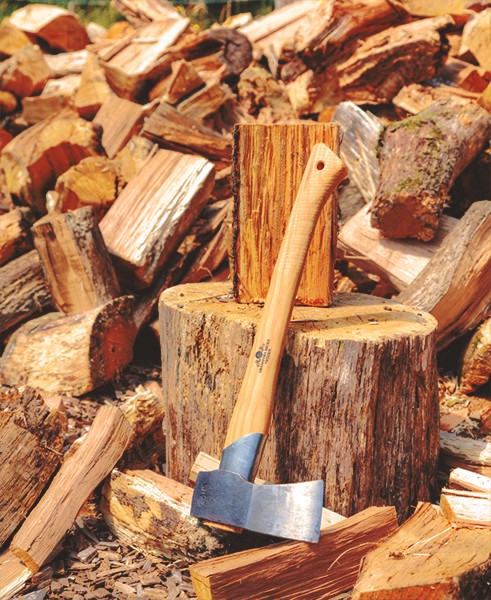 Any tree species which readily splits can be used as kindling. The wood of most conifers makes good split kindling as does ash, birch and oak. When possible I like my kindling basket to have some slightly resinous fast lighting sticks, such as pine, and a few of a denser wood, such as split oak heartwood, to give good embers to my early fire. Much as I like beech and elm sticks for use as kindling, neither will split particularly easily. 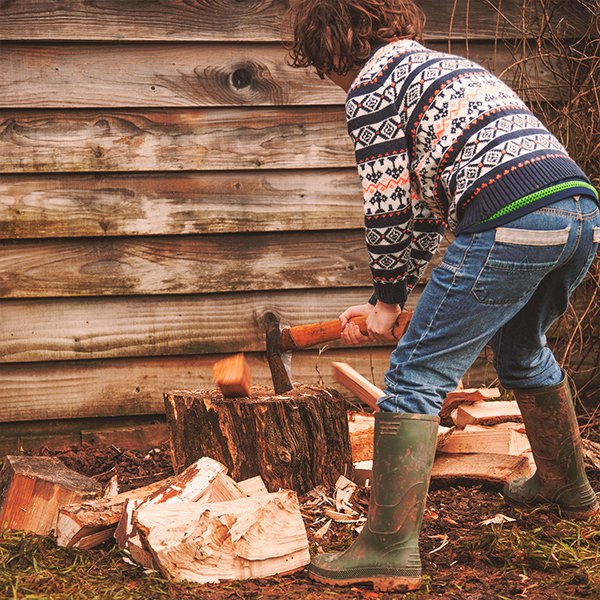 I know of more people injuring themselves splitting kindling than the seemingly more dangerous task of splitting firewood logs. The danger occurs when one hand is used to hold a piece of wood, while the other swings a hatchet or bill hook at the same piece! I have used the following three safe techniques and still, touch wood, have all my fingers.

The Sissy Stick – This method uses a length of wood of about 12 inches (30 cm) to keep the holding hand away from the piece of wood or board that is being split. The Sissy stick is used to balance the piece of wood being split by a hatchet or bill hook and keeps the holding hand at a safe distance. It is slightly slower than when actually holding the wood, but your fingers are worth it. 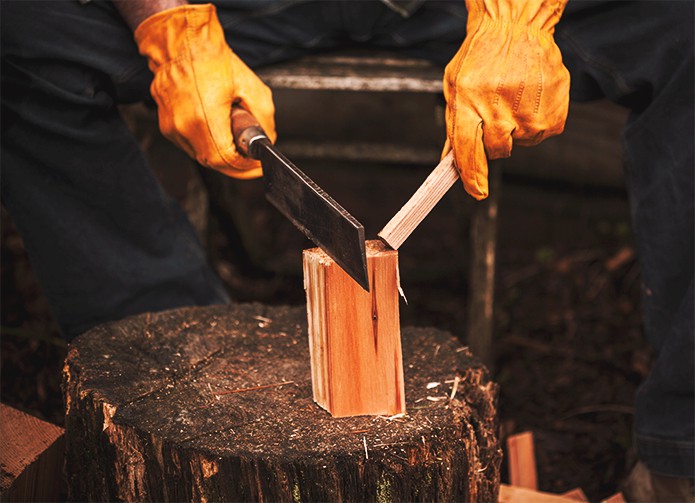 Heavy axe with short handle – The danger when using a hatchet (a hand axe of about 1 lb weight) is that the head needs to strike the wood at a reasonably high speed to be sure of splitting it – and ensuring an impeccably accurate strike time after time is difficult. You can achieve the same splitting power by having a much heavier axe moving at a much slower speed. I have a 4 lb axe with a reasonable edge and very short handle to do this. You can further improve safety by lifting the piece of wood that is to be split with the kindling axe and then let the two fall and strike the chopping block together. 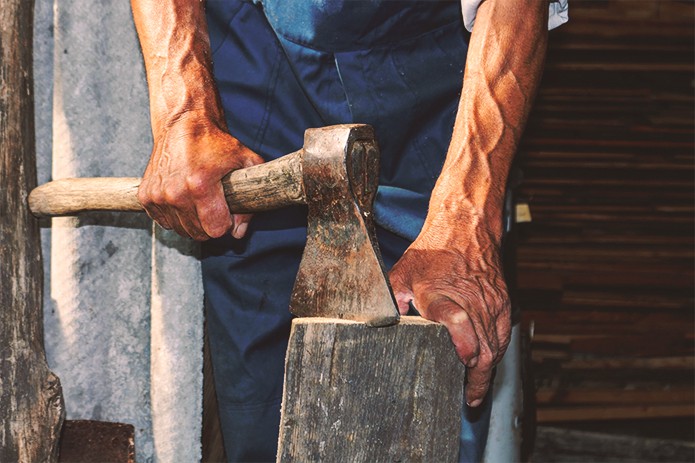 Using a Froe* – In a curious way, this is something of a combination of the two techniques above in that both hands are away from the strike impact that splits the log, making it another very safe technique. The froe is placed on the log and struck with a wooden mallet. To speed things up a good trick is to wrap a rope or elastic cord around the log first so that the log is held together as each split is made. After each split wriggle the froe a little to make sure the fracture goes right through the log. A series of parallel splits are made across the log and it is then turned 90⁰ for a second series of splits to be made and thus reduce the log to a perfect bundle of kindling.(* A froe is an ‘L’ shaped tool used for splitting wood along the grain.) 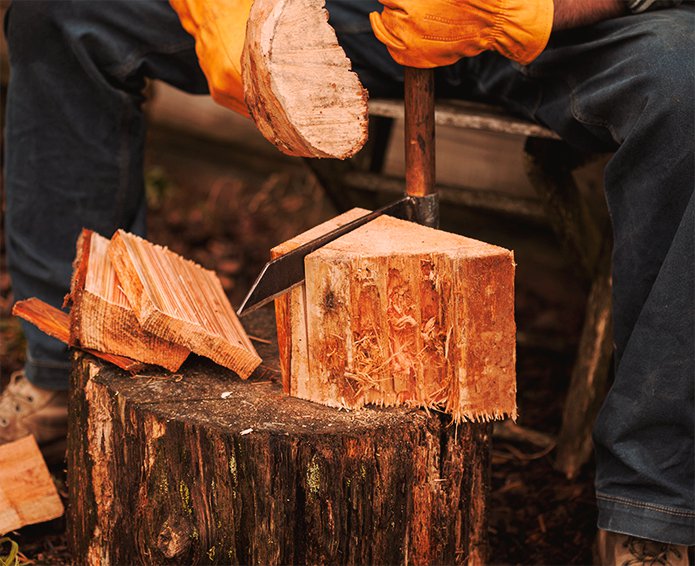 A good working method is to have two large baskets or bins to hold your kindling. As soon as one container is empty, fresh kindling is made and gathered to refill it. The most important thing is to keep your kindling as dry as possible. Dry wood is so very much easier to light than damp wood and a good supply of bone dry kindling is one of the real secrets to making wood fires a pleasure. 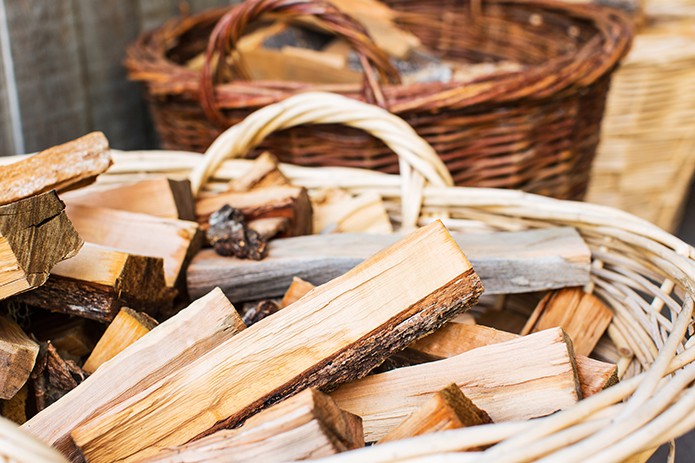 To finish on a traditional footnote I’d like to record how wood fires in grand houses were once kindled. Here we are talking about homes with large kitchens and broad inglenook fireplaces. The custom when possible was to cover the evening fire with wood ash so that glowing embers could be raked out in the morning to start the new fire. The live embers were heaped together with any pieces of dead charcoal or partly burnt wood and blown with bellows until the whole heap was once again burning brightly. A faggot of dry sticks was then laid across this burning heap and, in a very few minutes, the room had a bright fire. A faggot is a bundle of brushwood sticks tied around the middle to hold them all together. Gorse (Furze) was gathered in heathland areas, but hazel and ash faggots were more common as the practice of coppicing woodlands was once widespread. I have read of one inn where their fire did not go out for over 100 years, and of another where faggots were burnt in a ratio of two hazel to one ash as the best way to warm a room quickly. 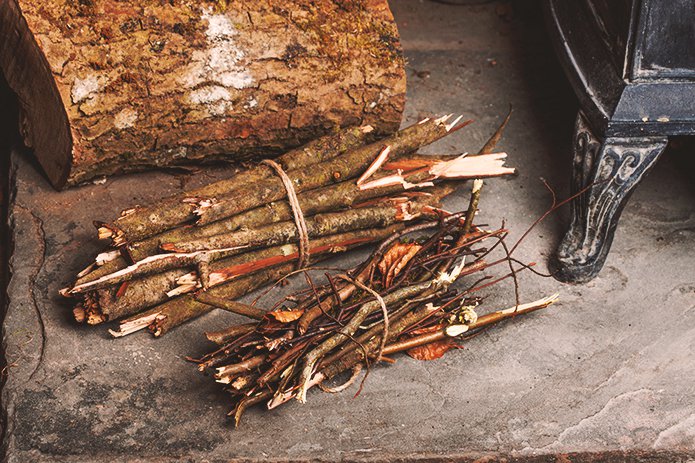 I have a particular fondness for kindling. For me it evokes so many happy memories of woodland walks or trips to the beach where my children gathered sticks of driftwood and then brought these uniquely useful souvenirs home to light our evening fire. Modern firelighters do have a place with wood fires, but proper traditional kindling offers so very much more. 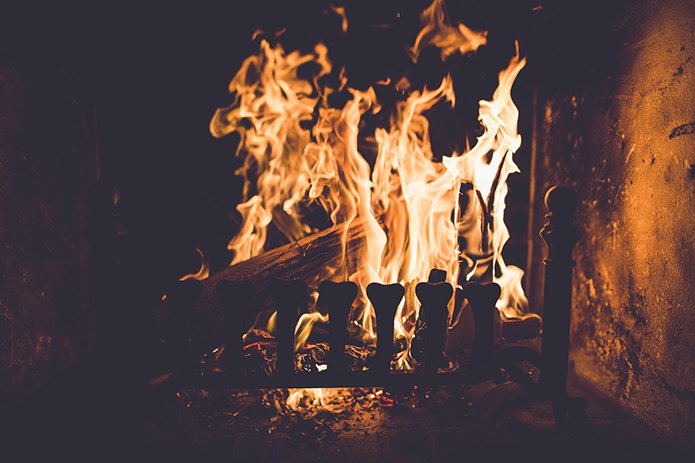 Vincent Thurkettle is a woodsman. He first studied woodland skills at Dartington Hall in Devon when he took the Royal Forestry Society’s, ‘Woodman Certificate’. Later, as a manager with the Forestry Commission, he became a Chartered Forester. His family home has always been heated with the kindling and firewood that he has cut and split himself. He published ‘The Wood Fire Handbook’ in 2012.