Exploring the ancient craft of Italian pewtering with Cosi Tabellini. 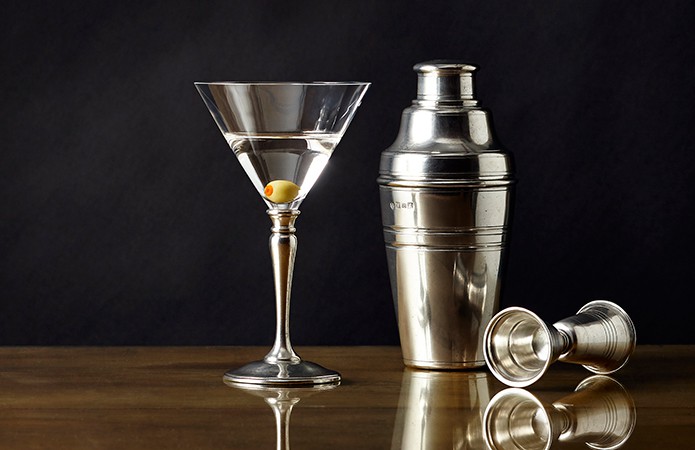 It you are anything like me, most of the time you see, hold or use something and it doesn’t really cross your mind as to how it was made; it’s just an extremely familiar item that obviously has been manufactured, but doesn’t warrant any further thought, as all too often it is has been mass-produced, and you don’t want to think too hard about it. Or, sometimes, it is something a little more special, but made of, let’s say, silver, wood or clay, so you rightly (and maybe at times, wrongly) assume you know pretty much how the object was made if it touched you enough to provoke a silent query.  Very occasionally, however, well for me anyway, something touches you to the point where you have to know how it was created, where is it from, as it has more than just touched you, but properly poked your senses out of their slumber, to question the origins of this extra-ordinary object before you, to begin a journey of discovery and appreciation. 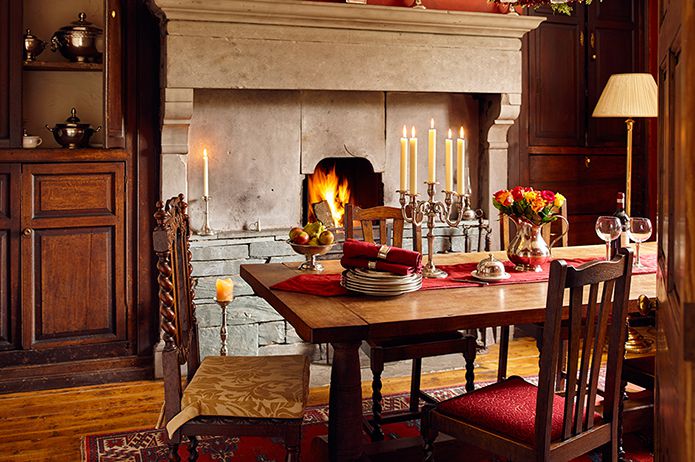 This how I felt when I first came across a piece of Cosi Tabellini pewter, with its solid, modest beauty, its muted metallic hue and soft tactile ‘patina-ed’ surface. Of course I had heard of pewter, and I have, like many of us, a pewter tankard marking an occasion long-since passed, a graduation present from a dear family friend – a token of commemoration for posterity stored, but sadly seldom savoured.  Cosi Tabellini pewter, however, is different to my traditional tankard, it has a contemporary twist that takes the classicism of an ancient material and its associated techniques of craftsmanship and via the introduction of other materials; crisp lines of white ceramic, understated sparkle of crystal glass, and the warmth of cherrywood, transforms the pewter into contemporary classics via a clever, yet respectful, evolution of crafting techniques, whilst still maintaining the integrity and authenticity of crafting a metal by hand. 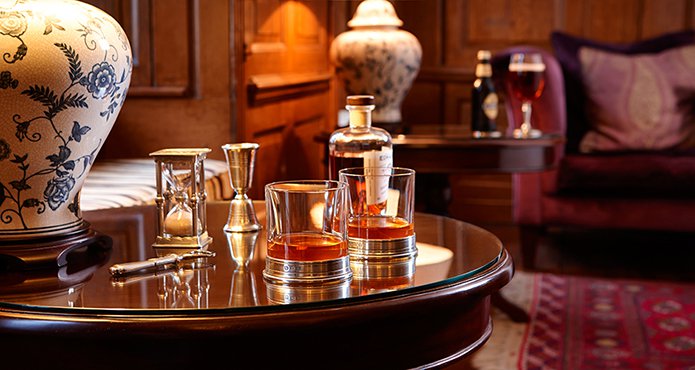 The result is a range of beautiful pieces. Some of which are a reverent take on classic design; stunning reproductions of such items as candelabra, goblets and tureens, so authentic that they have been used in Hollywood films such as Pirates of the Caribbean and Harry Potter; and others are respectful reworkings to create modern versions of the traditional, again making it on to the silver screen in films such as Material Girls and Capri. However, these lovely pieces of hand-crafted artisanship are not just reserved for the heady realms of a film’s fantasy and escapism, they are meant to be used, savoured, gifted and bequeathed. Cosi Tabellini is a global brand, with outlets in Italy, Russia, and the US (where it is marketed as Match Pewter, and sold in such prestigious stores as Barneys New York and Bergdorf Goodman), as well as the UK, where they have recently expanded into the British and Irish markets. 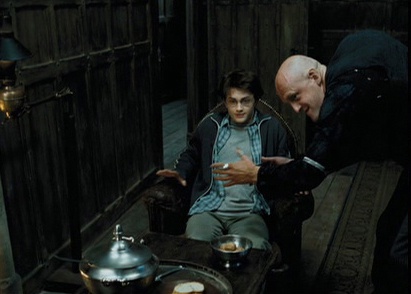 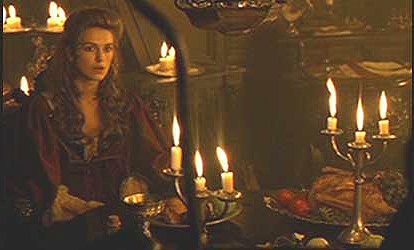 Cosi Tabellini pewter is a unique modern-day product with a fascinating authentic history of craftsmanship, and by visiting the busy Cosi Tabellini workshop in the ancient city of Brescia, Lombardy, Northern Italy, a workshop boasting 350 collective years of pewter craftsmanship, I was given an extremely privileged insight by the third-generation joint-owner, Alberto Tabellini, into how the classic craft of pewtering, or pewtersmithing, flourishes, in extremely safe and skilled hands, and continues to evolve within the contemporary world by clever design and innovation, to create the beautiful pieces that I stumbled across and fell in love with. And so my journey of discovery began, and I will recount it for you if you like… 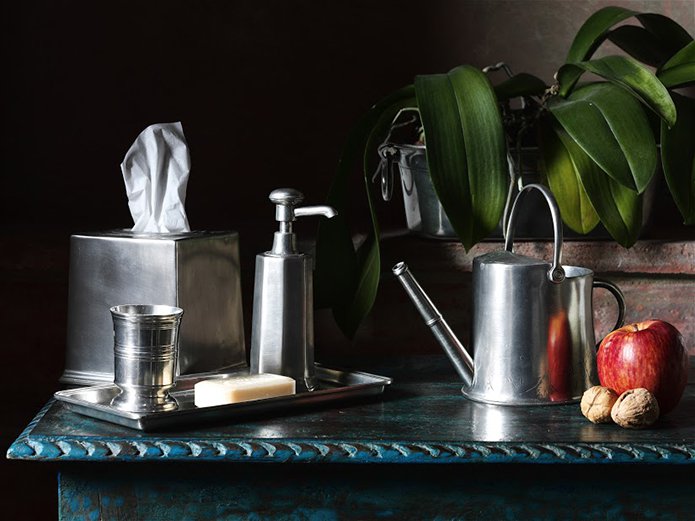 The craft of pewtersmithing has been in existence since Egyptian times.  A key component of tableware and liturgical items from the Middle Ages, it has been widely used for mugs, plates, bowls, measures and cutlery, and in more recent centuries for decorative and ornamental purposes as well.  The working of pewter was at first undertaken rather crudely by heating the metal on slabs and hammer-forged.  Later, earth, plaster and then stone moulds were used, replaced in time by copper, bronze, cast iron and iron, as pewter was cast.  Then the pewter object was finished off with a lathe before specific details were soldered on.  This technique has remained relatively unchanged since ancient times, especially as the original moulds were costly to produce and handed down through the generations, and as such pewter is mainly hand-crafted, hand-finished and artistically bespoke. 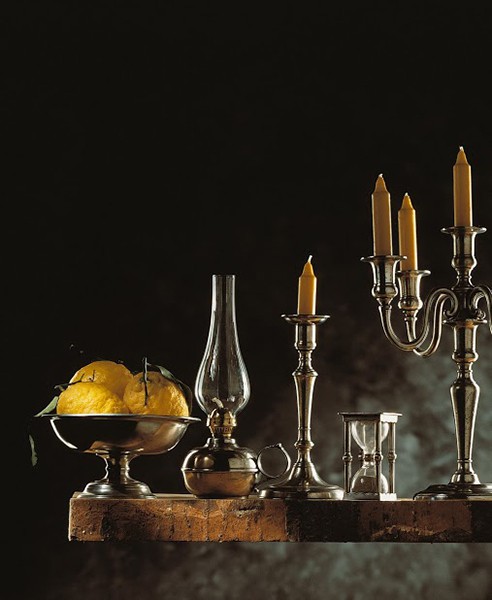 To outline the main stages in the manufacturing process for Cosi Tabellini pewter, the raw materials of the pewter – tin, copper and antinomy – are purchased separately  and made into ingots, soft enough to be cut easily into manageable pieces and added into the bowl of a casting ladle in their correct ratios ready for heating. (You will note that there are only three ingredients, as, you can rest assured that, modern-day pewter does not contain any lead, which is prohibited throughout the EU and USA by law). Then the pewter is heated to 300ºC in a kiln and very quickly a beautiful molten liquid is formed; different oily metallic hues abound on this almost solid liquid. Being very dense and heavy, the ladle has to be pushed under the surface of the molten pewter – the surface tensility is extremely high – meaning there is no residue when the ladle is emptied.  The pewter is extremely carefully poured into the mould. 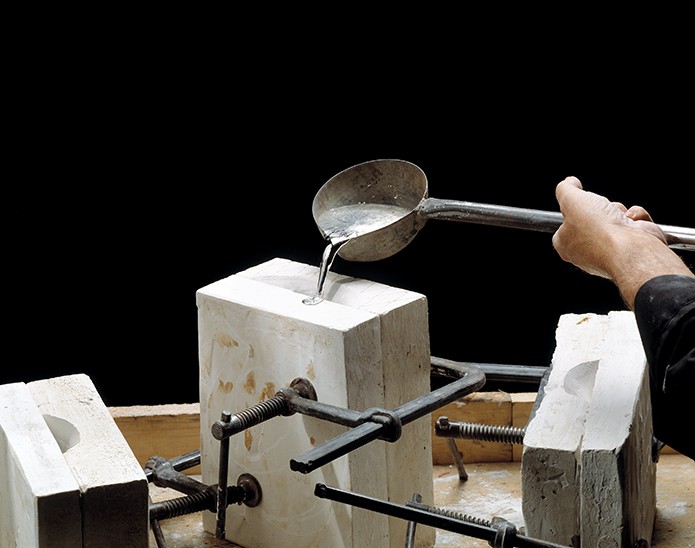 If it is a new object being produced, a mould has to be made based on a mocked-up scale model made by hand by a variety of hot and cold processes using sheet pewter, cut, shaped and welded, often using specialist hammers and other ancient tools.  Modern moulds are made from silicon rubber nowadays, although some of the original iron moulds are still used, as well as moulds made from other materials including steel, wood and even cuttle-fish bone; the modern moulds used by Cosi Tabellini are specially commissioned with built-in imperfections to capture an antiqued and distressed look to the surface of the cast pewter to enhance the character and warmth of the finished object. 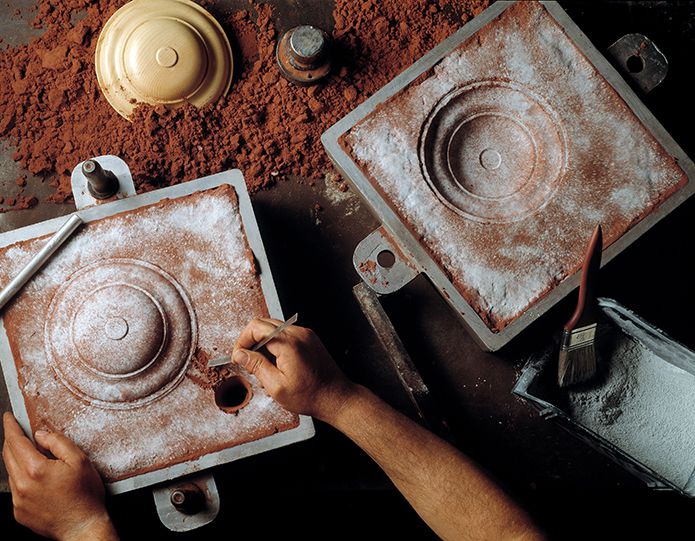 There are two types of machines that push the molten pewter through the moulds.  Centrifugal force machines, Cosi Tabellini’s preferred method, which forces the molten pewter into every nook, cranny and niche by centrifugal forces caused by high speed rotation. These machines date from the 1960s, and are not made anymore.  The second type of machine used in the Cosi Tabellini workshop during the casting process is more modern; the air pressure machine, which pushes, by the means of pressure, the molten pewter throughout the mould and is ideally suited to side-filling moulds.

Each object is normally made up of a number of different moulds, one for the main body, and then others for the different components, handle, base, decoration etc; some pieces have as many as 7 different moulds. Then, if each object has several different sizes, those moulds have to be either scaled up or down. Once each piece has cooled in the moulds, the pewter is gently removed and any superfluous lumps and bumps leftover from the casting process are removed by clipping off with specialist pliers which are then literally thrown back into the molten pewter to be re-used.  In the event of a worse case scenario, and the piece shows any signs of imperfection, the entire piece is returned back to the kiln to be melted down and reused. 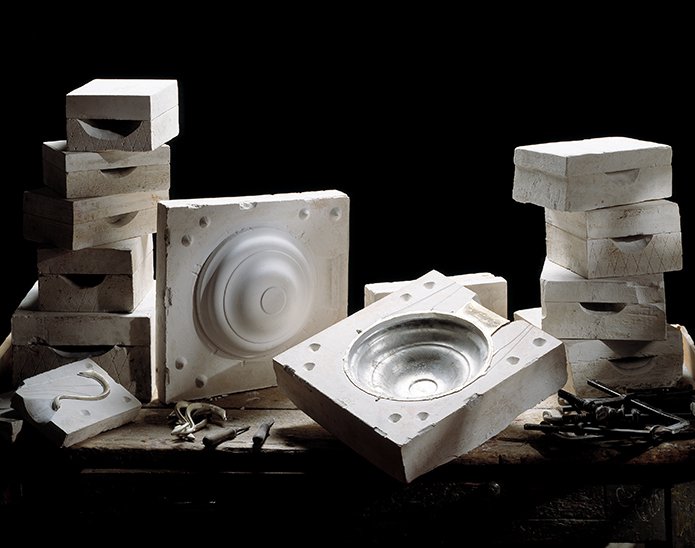 The next step is to ‘finish’ the pieces, by skilled polishing and then rubbing by increasingly fine graded wool, to remove any surface roughness and imperfections, yet retaining the character of the piece, either soft and matt or polished and glossy depending upon the style of the object. The final buff is undertaken using a fine cloth, made by the same company that makes the uniforms for the Italian army. 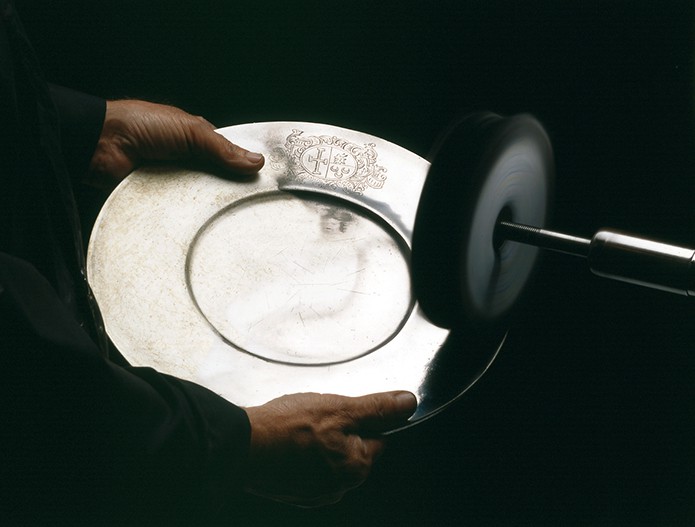 Each ‘finished’ piece is then assembled, welded and soldered skillfully by hand – most pewterer’s favourite part of the manufacturing process – which is an extremely skilful and technical procedure, especially with pieces designed to hold liquids. 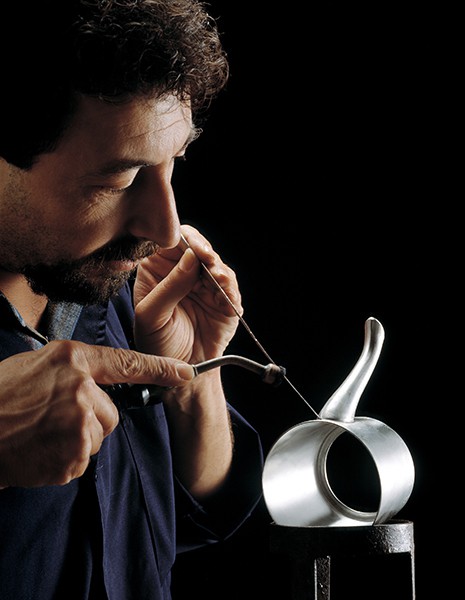 At this point any decorative chiseling and engraving is undertaken to enhance the overall character of the object. 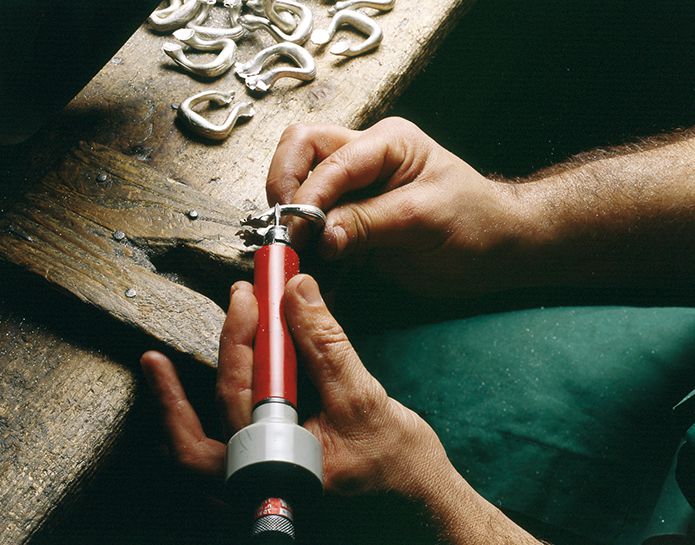 A large part of a pewter object’s charm is the pewterers’ touchmarks upon it, and, of course, Cosi Tabellini has its own distinctive marks on most pieces, as long as they are large enough to be able to take them.  Alberto Tabellini explains that a key part of Cosi Tabellini’s design identity is the mark of the thistle which is part of the touchmarks on most of the company’s early pieces. Sergio Tabellini, Alberto’s father, was friends with the Brescian artist Antonio Stagnoli, and commissioned him to paint one of the local flowers, the thistle, prolific in the mountains nearby. Stagnoli was born deaf and mute and then orphaned as a young boy, and his personal tragedies and suffering bring a beauty and grace to his paintings, depicting the harsh thistle as an object of natural beauty.  The thistle held great resonance with Sergio Tabellini, and it has been a mark of the company for many years. 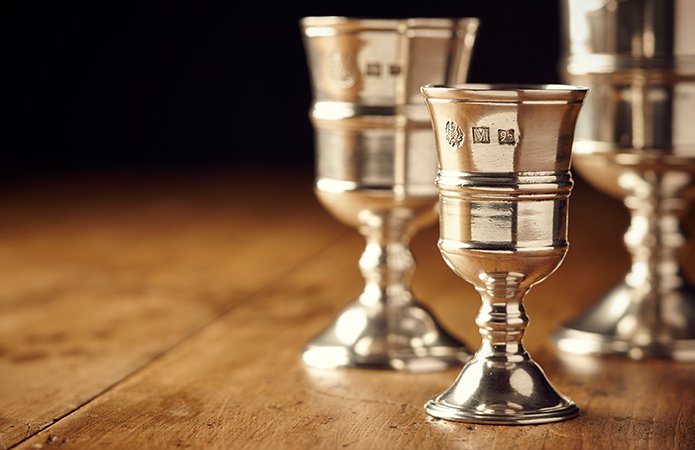 Alberto goes on to explain the other touchmarks that remain constant over the years are the initials of the two founders Bruno Cosi and nephew Sergio Tabellini, and subsequently other family members have been happy to continue with these original initials as a mark of quality and integrity.  Over the years design collaborations have meant an inclusion of an M for Match, a brand founded by David Reiss, who has taken Cosi Tabellini pewter across the Atlantic to an extremely receptive American audience, and also the numbers 95 have been added, to signify the high 95% tin content in all pieces. 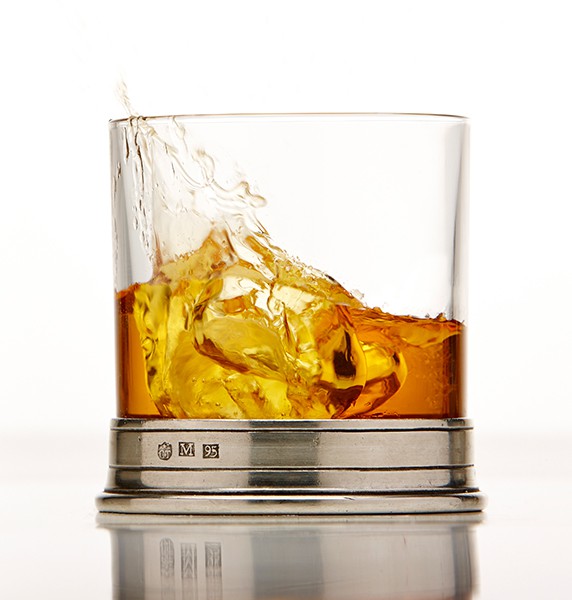 The tiny cluster of markings, carefully stamped by chisel and craftsman’s hand, subtly on the edge of one of the beautiful pieces of artisan-crafted pewter, is a true symbol, both physically and metaphorically of the heritage and contemporary evolution of Cosi Tabellini as a proud family company of true craftsmanship, creating objects of great value, integrity and simple beauty that assures quality and good taste.

That finishing touch of stamping the touchmarks almost completes the piece.  A final colour wash and gentle polish highlights any decorative relief and the piece is ready for packaging – that is unless a customer has requested a bespoke personalised message or design logo to be added, in which case this is added as the very final stage before packaging. 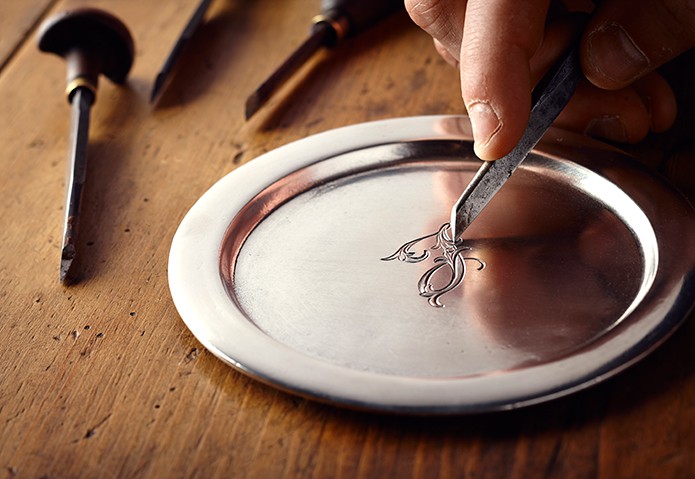 The whole process of casting, assembling and welding is pretty much the same as it has been in pewter workshops over the centuries; talented craftsmen creating each piece by hand or hand tools and hand-machinery, and finally hand-finished, making each piece, literally, a modern masterpiece. 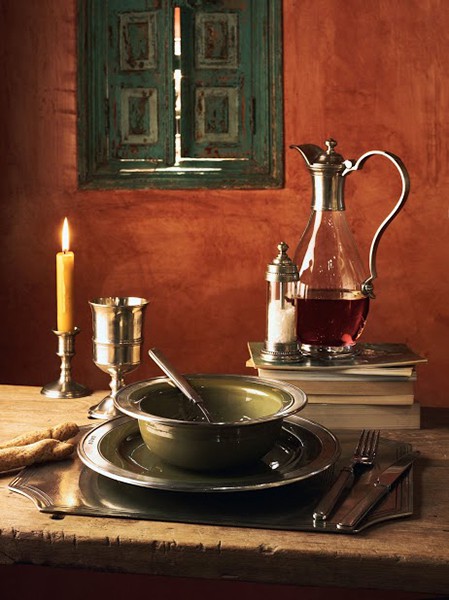