An overview of the work of NORM.ARCHITECTS with insights from one of its creators, Jonas Bjerre-Poulsen.

NORM.ARCHITECTS was founded in 2008 by Jonas Bjerre-Poulsen and Kasper Rønn. Located in wonderful Copenhagen, NORM is testament to Danish design’s constant prolific influence in the fields of architecture, product design and interiors. NORM’s work encompasses a number of distinct and interrelated facets. There is a focus on residential architecture, commercial interiors, industrial design, photography, graphics and art direction. Such a combination of disciplines lends itself to the achievement of a remarkably expressive output, where the principles applied to creating interior spaces are similar to those applied to product design. This cross-fertilisation of design principles has resulted in a creative portfolio whose contents are as diverse as they are fundamentally connected. 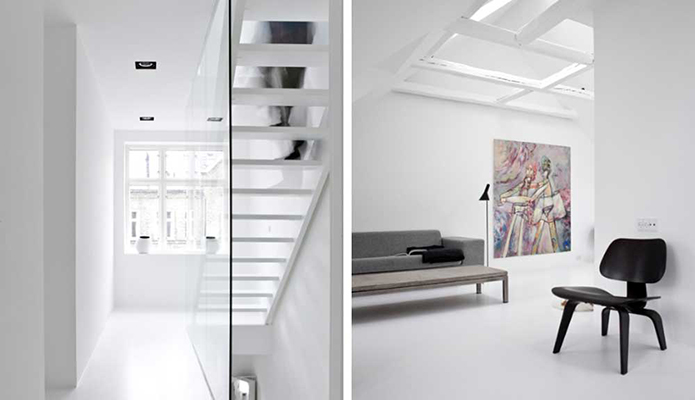 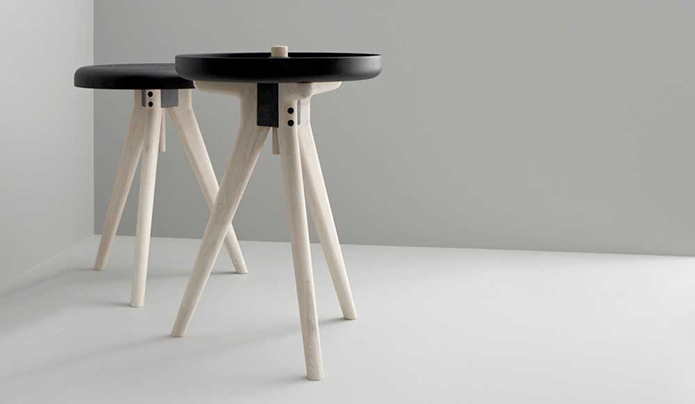 Jonas Bjerre-Poulsen and Kasper Rønn, both born in 1976, met in high school. They graduated as architects from the Royal Danish Academy of Fine Arts, Rønn in 2002 and Bjerre-Poulsen in 2004. Additionally, Bjerre-Poulsen holds a degree in business administration and languages from Copenhagen Business School and studied art and philosophy in Rome. Whilst the two have a similar predilection for aesthetics, their respective approaches to design and architecture are somewhat different. This difference in their partnership has resulted in NORM’s balanced creative outlook. Where Rønn is engrossed in technology and inventions, Bjerre-Poulsen will spotlight shape and tactility. In a country such as Denmark where the weather can be more than a little temperamental, the home, being inside, having good furniture and lighting, are all extremely important. At NORM, they have each of these bases covered. 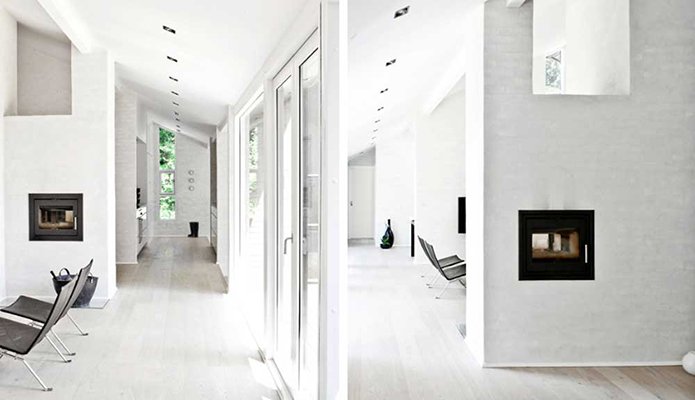 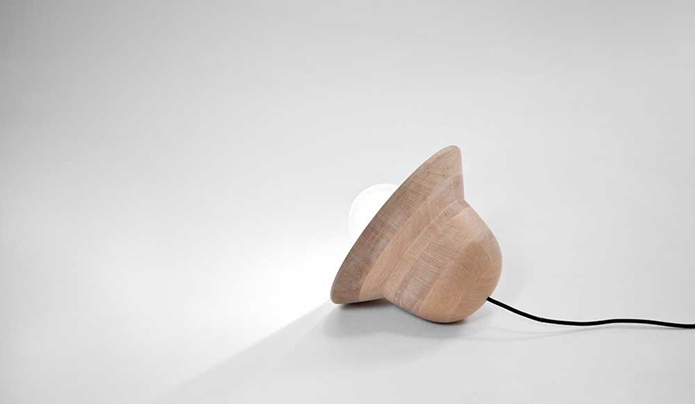 Central to NORM’s design process is the question “why?” Why create a product; why should it exist; why should people buy it and want to keep it et cetera. The premise is one based on a deeper understanding of design, its usefulness, aesthetic and durability. Designs should be understandable, unobtrusive and honest. According to Bjerre-Poulsen, “Norm Architects begin from the inside out, [considering a] project from how it is used, how it sounds and feels to touch, rather than purely considering the visuals.” (Source: Mildred)

NORM draws inspiration from centuries-old norms and traditions found in both architecture and aesthetics. Bjerre-Poulsen believes “it is important to draw inspiration from those traditions that have been refined for centuries.” (Source: Mildred) The studio works to a high-level of integrity, emphasising attributes that include quality, durability and timelessness. The work has an air of confidence, yet is without pretence or grandeur. Rather than manipulate and exploit the consumer by making fashionable or trendy products, NORM is fastidious in its approach to good design. Indeed, much thought and effort has been invested in capturing many of the fundamental tenets of design. Work breathes liveability, is elegantly understated, confident and discerning. It embraces modernity and sophistication. It has minimal form, emotional pull, modesty, tactility, longevity and authenticity. NORM’s designs instil a sense of warmth, adoration and respect. They have an awareness of place yet do not limit freedom of movement and ways of behaving. 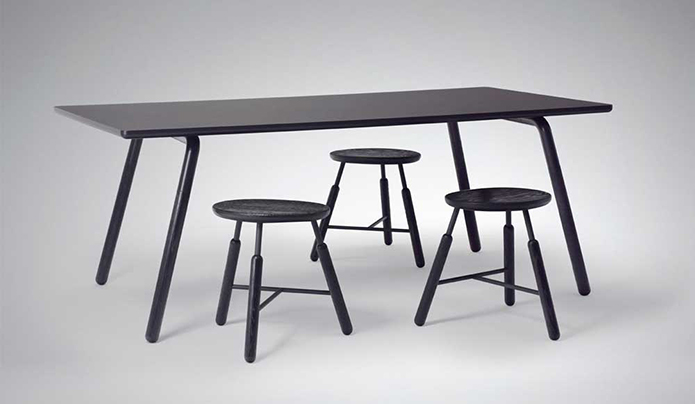 Design is NORM’s forte. The philosophy is one that ensures design serves a purpose, is aesthetically appealing and provides inspiration in life. NORM cares about people and an individual’s interaction with design. Outputs are not intended to merely satisfy Bjerre-Poulsen or Rønn’s own design egos; on the contrary they are about engaging the individual in a conscious relationship with design. NORM’s interiors and objects are tactile, resolute and meticulous. They are intended for practical use, whilst their Nordic good looks permeate and enliven their surroundings. At NORM, the emphasis is placed on reaching a point where a project requires no additions or subtractions, where it is consummate. 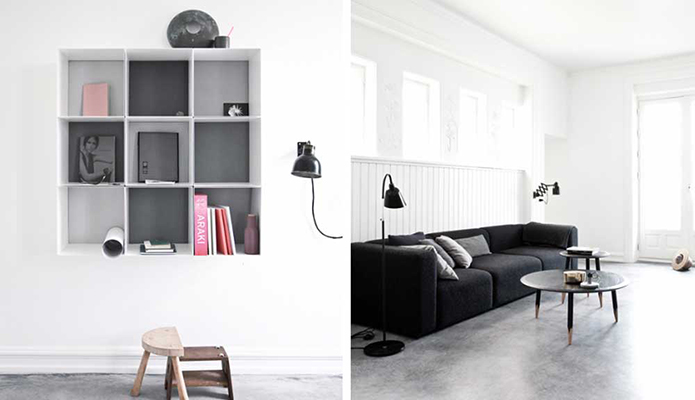 Reflecting on the place of design, Bjerre-Poulsen believes that “people think of design as added grandeur, something spectacular.” He observes that “when you try to get something that gets attention, it’s less striking. So we [NORM] try to do something softer but with soul and character.” (Source: Metropolis Magazine) The Milk Lamp for Danish company &tradition is a great example of this, combining Nordic tradition with a Japanese zen-like quality. NORM respects that it is better to consider lighting in a holistic context. Lighting is not simply an added extra or afterthought, but rather it is integral to the balance and harmony of a space. 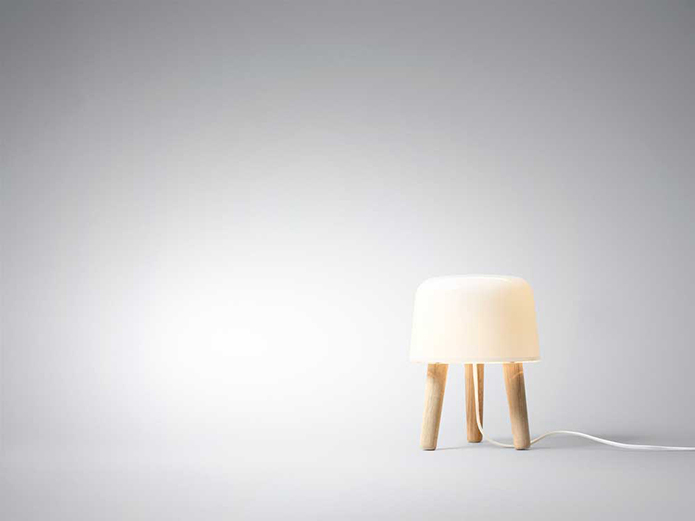 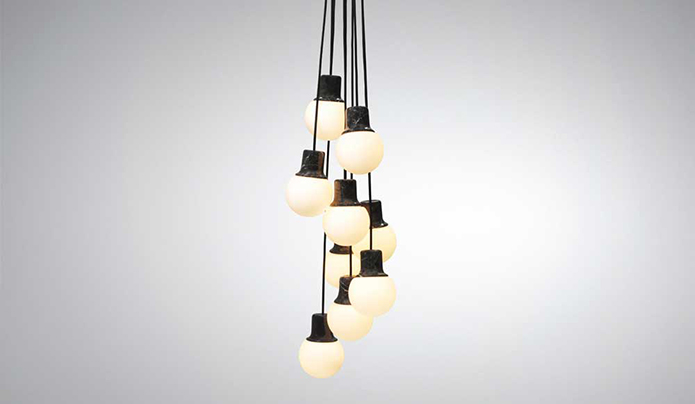 NORM.ARCHITECTS collaborated with Danish design house Menu and Copenhagen restauranteurs Cofoco, to create the Copenhagen restaurant, Höst. Höst is expressed as “an embodiment of the clash between romanticism and modernity… Höst is rustic gone simplistic. Rural gone urban. Past gone contemporary.” (Source: Dezeen) Its labyrinthine interior is an organic and urban synthesis of worn materials, granite, concrete, wood, metal and glass. Lighting contributes a gentle ambience to the space and wool rugs and blankets provide patrons a degree of cosy intimacy.

As a complement to Höst’s interior, New Norm Dinnerware was designed by NORM and produced by Menu. It has a poetic narrative that is a visual expression of urbanity juxtaposed with rustic appeal. The dinnerware revolves around a white plate whose appearance is altered by adding additional pieces, such as a smaller blue or grey plate or a granite slab. Bjerre-Poulsen remarked that “on several levels modernity and interaction become evident in New Norm Dinnerware. The multitude of parts, materials and colors (sic) provides numerous possibilities and expressions.” (Source: MOCO LOCO). 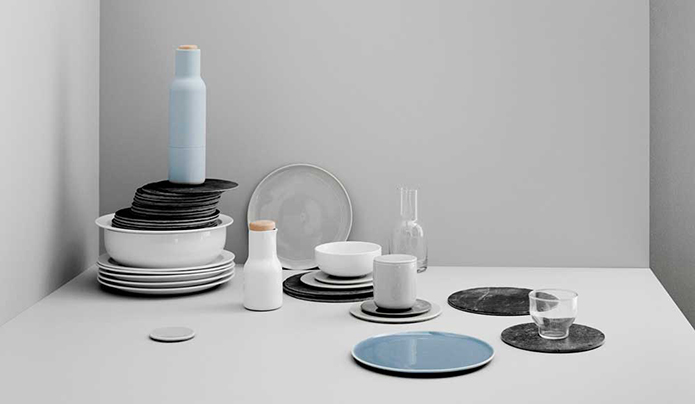 Without ostentation, Höst aims to convey design both through and alongside its food. A Nordic ambience is achieved by using old Nordic traditions and materials, juxtaposed with today’s fresh and modern perspectives. Of the restaurant, Bjerre-Poulsen says: “the Höst concept was initially born out of the desire to create an interactive space where we could showcase the New Norm Dinnerware collection we designed for MENU… [it] needed a universe [in which] to come alive.” (Source: Press release, 13 September 2013). The concept has proved hugely successful with Höst winning two distinguished Restaurant & Bar Design Awards in London in September 2013 for “Best European Restaurant” and “Best Restaurant”.

Simplicity, functionality and tactility connect each of NORM’s projects. Bjerre-Poulsen believes “it is more important than ever to focus on tactility in design [and] that touch, taste, smell and sound are [often] neglected in design.” (Source: design elements). It is thinking such as this that has positioned NORM in the enviable, yet wholly warranted, position of being highly regarded and sought after. One new commission is a seating and dining line with American design retailer Design Within Reach. (Source: Metropolis Magazine) NORM’s propensity to combine innovation and modernity with time-honoured traditions and craftsmanship will doubtless see the company continue to flourish. It might be rooted in Danish and Nordic design heritage, but NORM’s thinking and vision are inherently global.